The Crusaders will evoke the spirit of their extraordinary Super Rugby campaign in 2011 when they return to the field against the Waratahs on Saturday.

Captain Sam Whitelock said his team are still coming to terms with last Friday's terror attack on Christchurch in which a gunman claimed 50 lives at two mosques.

Their scheduled match against the Highlanders the following day was abandoned after distraught players were consulted and Whitelock said their preparation for the match in Sydney had a surreal feel to it.

He compared it to their reaction in the immediate aftermath of another tragedy, the devastating earthquake of February 2011 that killed 185 people in Christchurch. 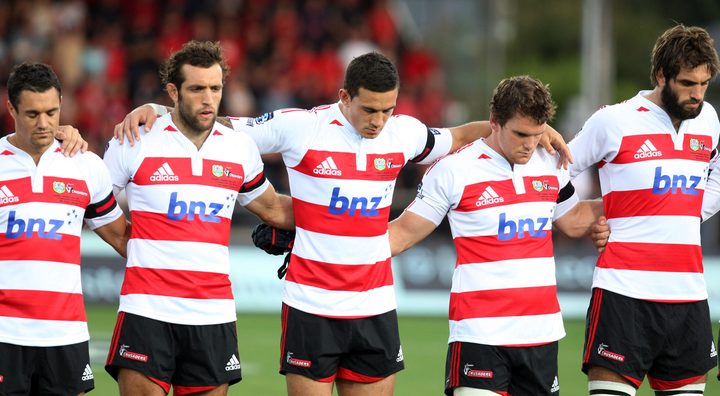 Sam Whitelock (right) and fellow Crusaders players remember the victims of the Pike River and Christchurch Earthquake ahead of a match at Trafalgar Park in Nelson in 2011. Photo: Photosport

After that team abandoned their next game, they embarked on a remarkable campaign in which they played every game outside Christchurch before losing the final to the Queensland Reds.

"A few of us older boys have been putting some thoughts and feelings across to try and help everyone out," said veteran All Blacks lock Whitelock, who was in the 2011 team.

"It's been a great week to really get the boys tight and to make sure they're in a good space to go out and perform this weekend."

It will be Whitelock's first appearance of the year for the unbeaten competition leaders after an extended off-season break.

He was thankful to have captaincy duties to perform this week, taking his mind off last week's horror.

"Once I've talked about it, I can look at the rugby stuff but everyone's got different emotions," he said.

"It's about making sure you're aware of that and if you recognise someone's probably feeling a bit down, get alongside them, help them out."

Both teams will pay their respects to the victims the shootings with the teams walking side-by-side on to the field and forming one circle and holding a minutes silence ahead of the match.