The Football Ferns have beaten Argentina 2-0 in Brisbane for their first win at the inaugural Cup of Nations. 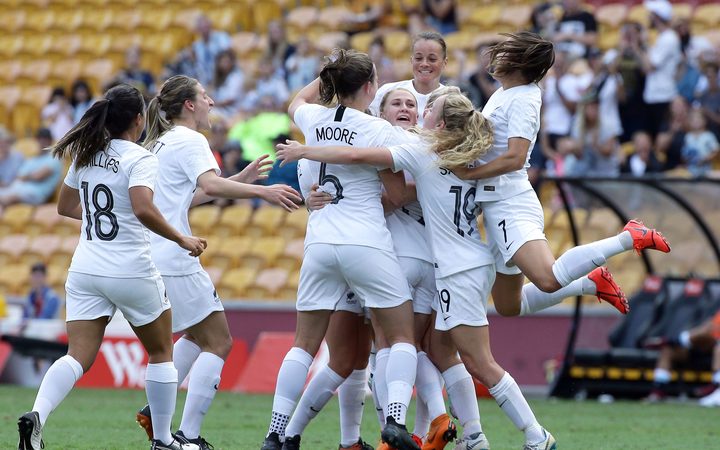 It wasn't a flawless performance from the Ferns but defender CJ Bott's stunning second-half strike and an earlier effort from Katie Rood were enough for Tom Sermanni's side to bounce back from an opening day defeat to hosts Australia and get three points on the board.

Australia scored their second win of the tournament with a 4-1 victory over South Korea.

"It was a little bit scratchy but the positives are that we won the game and came away with a clean sheet," Sermanni said.

"But we know we have some work to do because it was still a little rusty."

Like all at Suncorp Stadium, Sermanni was flabbergasted at the quality of Bott's goal, the defender coming off the bench to pick up a loose ball fully 40 yards out and rifle home an unstoppable shot.

"It was a fantastic strike and it gave everyone a lift. I think that finished the game off for us in many ways," he said.

Bott had only entered the fray a few minutes before unleashing her remarkable effort and was almost at a loss for words to describe scoring her first international goal in such a memorable manner.

"My role is just to put the ball in the box so I'm pretty happy to score a goal like that. We had a game plan, it was a bit messy in the first half but we did well to pull it back together and it's good for our confidence to get a win after the Australia game," she added.

"If we can just keep taking steps forward and working on our World Cup preparation then we'll be in good shape going into the next game."

Prior to Bott taking centre stage, Rood had put New Zealand in front soon after the break, the impressive Paige Satchell bursting forward and seeing her saved shot fall at the feet of Rood to claim the fifth goal of her Ferns career.

Rood and Satchell were among five changes made by Sermanni from the Australia loss as Anna Green, Sarah Morton and Katie Duncan also came in at the expense of captain Ali Riley, Meikayla Moore, Annalie Longo, Sarah Gregorius and Katie Bowen. It was Duncan's first appearance in a Football Ferns shirt since 2016 while Ria Percival wore the skipper's armband in Riley's absence.

With Sermanni keen to view as many of his players as possible in action ahead of the FIFA Women's World Cup in June, the decision to rotate his squad paid off in a much-improved second-half performance. The pace of Satchell was a constant menace to Argentina while the winning margin could well have been higher as Rosie White, Percival, Green and Morton all had sights of goal.

The Football Ferns will now take the confidence gained from today's victory - their first over non-Oceania opposition since a 5-0 drubbing of Thailand in late 2017 - into a meeting with South Korea in their third match of the Cup of Nations on Wednesday.