The Crusaders have extended their record Super Rugby winning streak to 18, dominating Queensland's scrum in a 22-12 win in Brisbane. 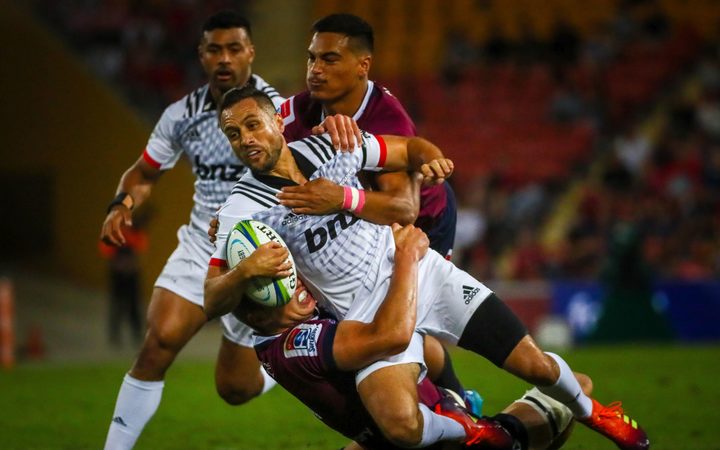 The back-to-back defending champions dictated play, holding 60 per cent of possession and making 46 fewer tackles as they repeatedly won the battle of the breakdown.

The Reds were defiant, but that workload eventually told as Scott Robertson's side powered away with four tries to two in front of 17,676 fans.

Brad Thorn's side battled hard but their typically solid scrum and line-out was shown up while they lacked patience with ball in hand.

A first-half foot injury to Jordan Petaia could also prove cause for concern, while Lukhan Salakaia-Loto's second-half yellow card for offside only made it harder.

Fullback Bryce Hegarty, who was tasked with much of the playmaking duties, also battled on despite popping out a rib in the first half.

Twice in the second half the Crusaders pushed over from close-range line-outs to seal the contest, with the first of those coming via Whetu Douglas following a 22-phase sequence.

Scott Higginbotham came off the bench to score late for the Reds and they threatened to add a third in the match's final moments.

But the host's chances of a comeback had earlier been thwarted when JP Smith was penalised for the slightest of obstructions as Liam Wright strolled through for a disallowed try with 10 minutes to play.

Queensland made almost double the tackles of the visitors in the first half and did well to hang on after trailing 10-0 nine minutes in.

Jack Goodhue's clever cross-field kick found Braydon Ennor all alone on the wing for the Cantabrians' first, before fullback Will Jordan finished a sequence that stretched 80 metres and saw eight sets of hands.

Samu Kerevi's decision not to take a shot at goal in the 35th minute paid off though, with the captain slicing through to make it 7-10 at the break.