After toppling last season's winners in the first round, the Northern Stars were unable to back up the effort and fell 51-57 to the Waikato Bay of Plenty Magic in their ANZ premiership netball match in Hamilton on Monday night.

The Stars were surprise winners over the Southern Steel in Sunday's opening round while the Magic suffered a shock loss to the Canterbury Tactix.

The Magic gradually assumed control of the match dominating the second half with the Magic defence shaking up the Stars' shooters to dominate the final quarter, 15-10. 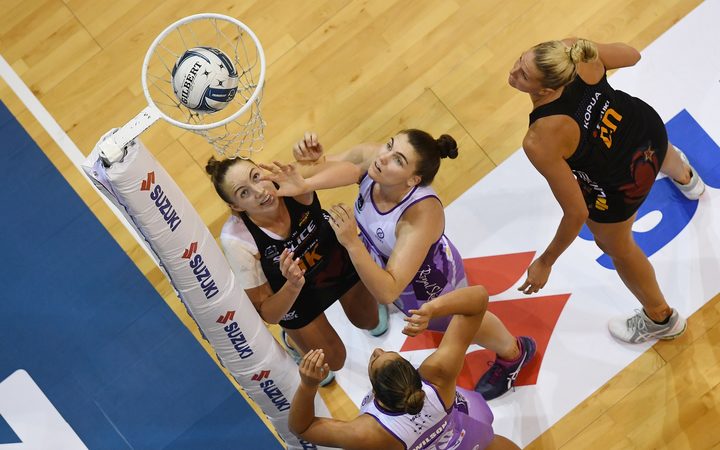 The WBOP Magic toppled the Northern Stars for their first win of the season. Photo: Photosport

But it was the consistency of the Magic's young attacking line-up that really stood out throughout the game, with 89 percent shooting accuracy, especially Abigail Latu-Meafou, who was named player of the match, shooting 34 goals from 37 attempts.

A disjointed start by the two sides proved how determined both were to take early control.

Keeper Kelly Jury, used her long reach to help put the Magic out to a two-goal advantage. Ariana Cable-Dixon's vision also set up her shooters perfectly under the post.

A spectacular intercept, followed by a rebound, for Stars wing defence Kayla Cullen broke the Magic's hold on the lead, and with the sure long-range shooting of Aussie import Charlee Hodges, the Stars leapt out to four ahead.

The Magic dragged it back to two down, 15-13, at the first break, and continued in the same rhythm to start the quarter and quickly draw equal.

But it was a see-saw spell, with the Stars pulling out to four, and the Magic bringing it back to lead by one.

Then with two goals from Maia Wilson just before halftime, the Stars assumed the upper hand, 31-30, to end the half.

With a strong bench and a need for fresh legs, Stars coach Kiri Wills brought in Ellen Halpenny at goal attack and Holly Fowler at wing defence.

Although both fitted in seamlessly, the change didn't give the Stars a second wind, and the Magic edged ahead again, by one.

Casey Kopua poured the pressure on Wilson, to upset her collection of the long passes, which allowed the Magic to stay in control.

A goal on the buzzer from Latu-Meafou assured the Magic finally led at the end of a quarter, 42-41.

The changes kept coming for the Stars, with Cullen returning to the court at goal defence, but the Magic stood firm.

With Sam Sinclair and Jury, in particular, forcing the Stars into a series of handling errors, and Latu-Meafou and Falkner untiring, the Magic extended their lead to seven and never let the Stars back in.