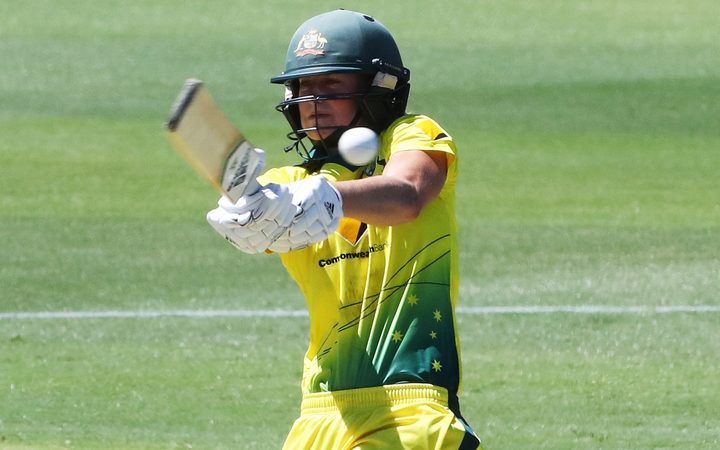 In reply, New Zealand crashed to 152 all out, with Perry striking an early blow with the ball and spinner Jess Jonassen taking a career-best 5-27.

The victory gives Australia an unassailable 2-0 lead in the best-of-three series which concludes next Sunday in Melbourne.

And it extends Australia's two-decade dominance over the Kiwis - they haven't lost a ODI series to New Zealand since February 1999.

Reaching the milestone on Sunday was a near-run thing: with two balls left in the innings, Perry was on 97.

The right-hander thumped a lofted drive which was dropped at deep mid-on by Anna Peterson - the ball spilt through her hands and into the rope.

Perry then cracked a last-ball six, boosting an Australian total featuring handy knocks from Alyssa Healy, who was dropped twice in making 46 from 75 balls, and Beth Mooney (42 from 52 balls).

Perry and Mooney combined for a defining 98-run partnership for the fourth wicket which ended in a dramatic 42nd over, bowled by legspinner Amelia Kerr.

Kerr had Mooney caught at midwicket, trapped Elyse Villani lbw for a duck two balls later and, next ball, bowled Ashleigh Gardner for a golden duck with a wrong'un to capture three wickets in four balls.

Her hat-trick ball in her next over was kept out by Perry, whose breakthrough ton came in her 102nd ODI and included eight fours and three sixes.

Perry took the new ball and dismissed the dangerous Suzie Bates (11) and returned 1-5 from her initial four overs - she finished with 1-15 from seven.

Sophie Devine (47 from 59 balls) and Amy Satterthwaite (37 from 54 deliveries) gave the visitors a sniff with a brisk 67-run third-wicket stand.