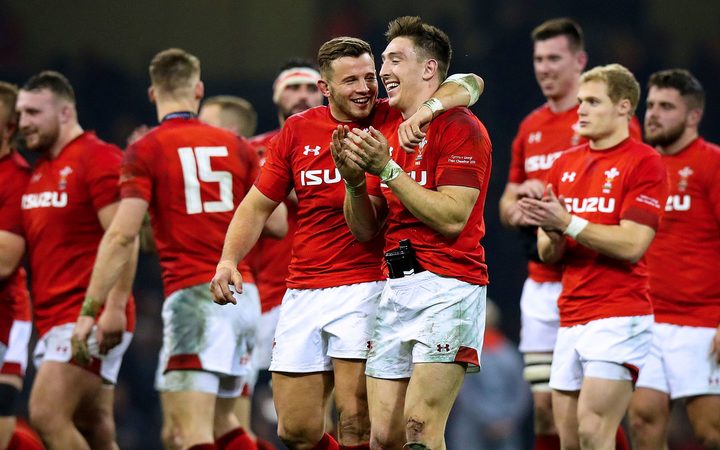 Wales after 21-13 victory over England at the Six Nations Championship Photo: © INPHO 2018

England were leading 13-9 after a first-half Tom Curry try and looked set to make it three wins in a row before the hosts turned the match, and possibly the championship, with a relentless attack that sent Hill over 12 minutes from time.

Winger Adams then caught a high kick in the corner to settle it and send the Principality Stadium into raptures, bringing back memories of 2013 when England arrived in Cardiff seeking a Grand Slam but were sent packing 30-3.

This game was a different beast, with momentum swings and nail-biting tension, but the outcome produced the same outpouring of emotion.

"We are obviously very pleased to get the win," Wales coach Warren Gatland said. "It was a tough test match against a very good England team. We were much better in the second half."

Wales top the standings on 12 points, with England second on 10, though, thanks to their earlier bonus points and with home games against Italy and Scotland to come, they are still well-placed to win the title.

Wales will be champions for the first time since 2013 if they win away to Scotland and at home to Ireland on the final day to secure a Grand Slam.

France, who beat Scotland 27-10 earlier on Saturday, have six, with the Scots on five. Defending champions Ireland, on four points, visit bottom side Italy on Sunday with renewed interest.

In a tight first half, England continued with their kicking policy, though with less impact against an expert Welsh back three, while the home side tried to keep the ball in hand, though without making much progress.

England's first-half defence was immense with Kyle Sinckler, Courtney Lawes, Mark Wilson and Curry tackling anything that moved to ensure the absent Make Vunipola and Maro Itoje were not missed.

The atmosphere, as expected, was electric but the thousands of England fans who had found tickets made their presence felt with 'Swing Low' reverberating around the ground, before being drowned out by a cascade of boos.

It was locked at 3-3 after a penalty apiece before England struck in the 27th minute. Lawes stripped the ball from Justin Tipuric and Curry peeled off the ruck almost unseen to charge over.

Farrell converted and England's supremely organised and, these days, disciplined defence meant Wales's best efforts came to nought and the visitors led 10-3 at the break.

Wales, though, chipped away with two more Gareth Anscombe penalties to get within a point on the hour mark as the home fans cranked up the volume with the match, and potentially the Six Nations championship, on a knife-edge.

England struck next as Curry forced a penalty that Farrell slotted over and though they were their only points of the second half it looked as if Eddie Jones's side would march on following their impressive wins over Ireland and France.

Instead of going for the jugular, however, England became a little passive, and Wales needed no second invitation to claw their way back into the game.

There followed a monumental passage of play as the Welsh pack hammered at the line relentlessly for 34 phases. England matched them hit for hit but eventually buckled as the hosts went wide through George North who sent Hill over.

Impressive replacement flyhalf Dan Biggar converted and though there was still time for England to hit back they looked out on their feet and Biggar hammered the final nail in the coffin with a spiralling kick for Adams to catch and scramble over.

Wales's 12th successive win surpassed the previous best run set from 1907-1910 and few victories could have been celebrated more vociferously.

"We lost some momentum, gave a few penalties," Jones said. "It was a game of fine margins and a few of our players were not at their best today. That can happen.

"Wales deserved their win. They are a tough side but they've got a couple of tough games and we'll be chasing them."