The Crusaders have opened their Super Rugby title defence with a dramatic 24-22 win over the Blues in Auckland, aided by two penalty tries. 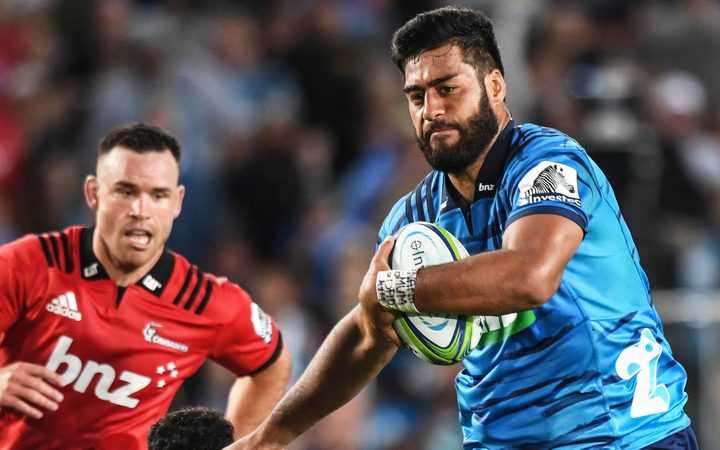 The nine-time champions scored four tries to three on Saturday at Eden Park, but only clung to victory when Blues reserve five-eighth Harry Plummer missed two late shots at goal.

Making his maiden Super Rugby appearance, Plummer skewed a handy conversion attempt and then a 45m penalty shot, both inside the final seven minutes of a fiercely fought Kiwi derby.

It was a gut-wrenching result for new Blues head coach Leon MacDonald, whose team look highly competitive and capable of breaking a seven-season run of failing to reach the finals.

The Crusaders, chasing a third-straight crown, did enough through the efficiency of their pack and the brilliant running of outside centre Braydon Ennor, who outshone Blues opposite Ma'a Nonu.

Referee Nick Briant dished out penalty tries in the 26th minute, when a Crusaders lineout drive was collapsed, and the 63rd when the Blues' scrum folded on their own line.

Both Crusaders regulation tries went to Manasa Mataele, the second set up superbly by a break from fellow winger George Bridge.

Akira Ioane was the pick of the Blues' pack in his 50th game, completing a long- range try soon after halftime, when his team had trailed 12-3.

In later games, Bernard Foley's costly late missed penalty cost the Waratahs an opening round win, with the Hurricanes holding on for a 20-19 win in Sydney.

Foley had landed all five of his earlier attempts on Saturday night but with just over a minute left, the normally reliable pressure kicker failed to land a penalty from just beyond 30 metres.

The Waratahs could hardly complain about the result as they had little ball in the last 20 minutes and lived on their nerves.

In Singapore, the Sharks overcame a slow start to cruise to a comfortable 45-10 win over the Sunwolves, running in six tries as their mix of pace and power proved too much for the Tokyo-based Sunwolves.

And in Pretoria, sevens veteran Rosko Specman scored two tries in his Super Rugby debut as the Bulls brushed aside the Stormers 40-3.

In the final match of the opening round, the Lions used a combative forward performance and steely defence to record their first Super Rugby victory in Buenos Aires with a 25-16 win over the Jaguares, aided by a hat-trick from flanker Marnus Schoeman.