The Māori Ferns will use the NRL All Stars match to prove why indigenous sides should compete at future world cups. 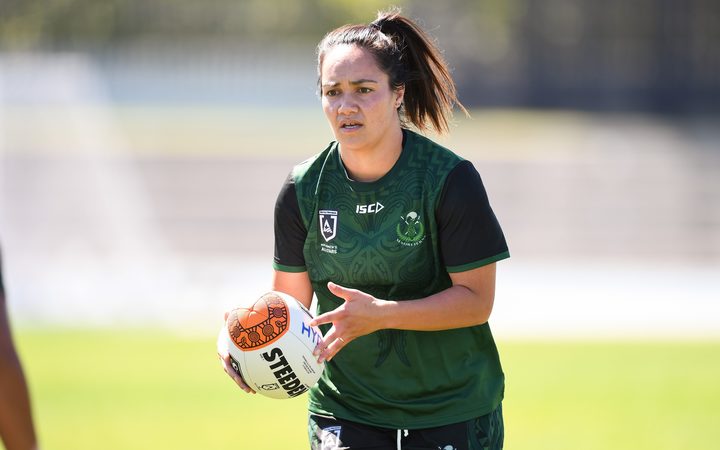 Have you ever known a sporting event where cultural identity trumps country, heritage overrules club and a sense of belonging is showcased through traditional practices?

This Friday's All Stars double header at AAMI Park will be a clash like no other.

Māori Ferns co-captain Rona Peters, who is based in Australia and plays for the NRLW side the Brisbane Broncos and Queensland, says to be selected for the Māori Ferns rugby league team was home calling.

"This is a big moment. We get to go out there as proud Māori and we've done the hard work in preparation for this game," she said.

"The way we have come together is like we have been together for years and gelled so well and that's the whakawhanaungatanga (kinship, sense of family connection).

"I have been in Australia for four years now, I treasure these moments because I don't get to do this much."

The 30-year-old who hails from the far north but grew up in Papakura, is reunited with her two sisters Kahurangi and Hilda for their first campaign together since playing in a Māori tournament in Huntly three years ago.

Being immersed in te reo Māori, haka, waiata (song) and whakapapa (genealogy) with her sisters at her side, she explains, has drawn strength for her as a player on the field.

These attributes, the backrower believes, make for a powerful team.

Whether a New Zealand Māori or Indigenous Australian, the principles of mana (strength) and identity they share is something Peters feels could be an undeniable force on the international stage.

"Doing all of this together with our brothers too has brought me back to being at kura again doing it all like one big whānau," Peters said.

"Out of this we give a good display on the field and I would like us to represent Māori and indigenous culture at a World Cup."

The Ferns have been in preparation for the match since November with coach Rusty Matua laying a heavy emphasis on fitness especially with many of his players based across the Tasman.

Wānanga (seminars) and technology have played critical roles with players required to document their cardio sessions via videos posted to a private Facebook page.

It was also on this page players were able to watch and learn waiata and haka tutorials.

Now, all together in Melbourne, the team are describing the experience as the pinnacle of their careers.

"We've laid a really strong foundation with fitness over the last two months and training in the sun has really helped with conditioning and it's about polishing team work now," Māori Ferns head coach Rusty Matua said.

"Representing our culture makes it so much more special than just rugby league, it's an opportunity to represent our culture at an international level in the sport we're passionate about.

Of the 18 players in the Ferns six are based in Australia, two of them - Tazmin Grey (younger sister of Kiwi Jordan Rapana) and Zahara Tamara, play for the Jillaroos who Peters said had fit into the squad perfectly.

"They're easy, they are cool, and I play club with them over here and they've been learning the haka, learning the waiata - you wouldn't even think they were Jillaroos [laughs]," Peters said.