While proven stars Eddie Dawkins and Natasha Hansen sprinted to the top of the podium, Southland teenager Corbin Strong upset more experienced rivals in an exciting points race on the second night of finals at the national track cycling championships in Cambridge. 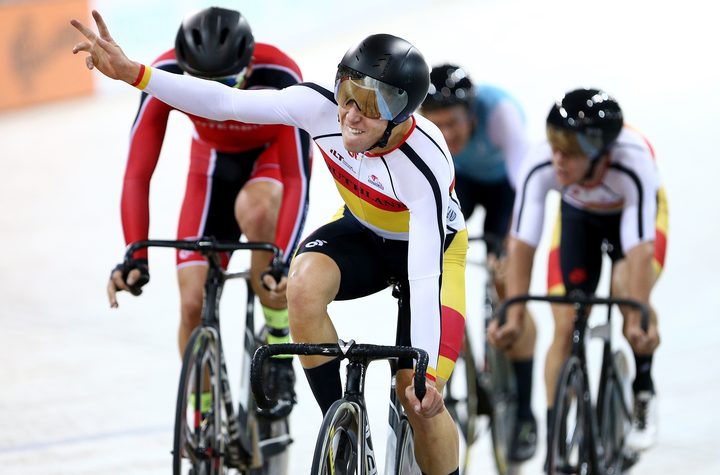 Both he and 2017 pursuit world champion Jordan Kerby put two laps on the field to claim the additional 40 bonus points and it was Kerby, who recently switched allegiances from across the Tasman to New Zealand, who held a narrow three point margin going into the 12th and final sprint.

However Strong produced a withering burst of speed to win the double point sprint with Kerby back in fourth to give the young Southlander the title with 70 points.

Kerby finished second on 65 with Southland's Tom Sexton third on 38.

Earlier Hansen broke the championship record in 10.888s to top qualifying in the elite female sprint ahead of teammate Olivia Podmore.

The pair worked through to the final with Hansen winning in two straight rides.

"I can take some confidence out of today and hopefully build on that. I felt that I executed the races well."

Fellow Southland rider Dawkins, a star of the recent World Cup in Cambridge, was fastest in qualifying in 9.801s with fellow team sprint mates Ethan Mitchell and Sam Webster clocking 9.841 and 9.889 respectively in an impressive showing of power sprinting.

Dawkins was pushed to a deciding race over Mitchell in the final with Webster third.

"It was great to be able to get back to sprinting the way I used to, with confidence. I don't care if it is long or short but just committed fully," Dawkins said.

"I sent the final to three rides which was unnecessary but it was good to be under the pump and have to work under pressure but I came away with a great result. Today showed the strength of the top three boys ahead of this year's world champs in Poland."

Drummond won the scratch race and elimination and was second in the Tempo and Points to finish on 155 points ahead of Tempo race winner Edmondston on 145 and Points race winner Hodges on 144.

"It was an awesome win. It was hard fought because we were going 1-2 for most of the events," said Drummond.

"I was only two points ahead of Holly coming into the final points race. I wanted to get extra points at the start and then watch for Holly near the end of the race in terms of taking a lap."