The Wallabies have begun the search for a new attack coach, with Stephen Larkham axed by head coach Michael Cheika, becoming the fall guy for a disastrous 2018. 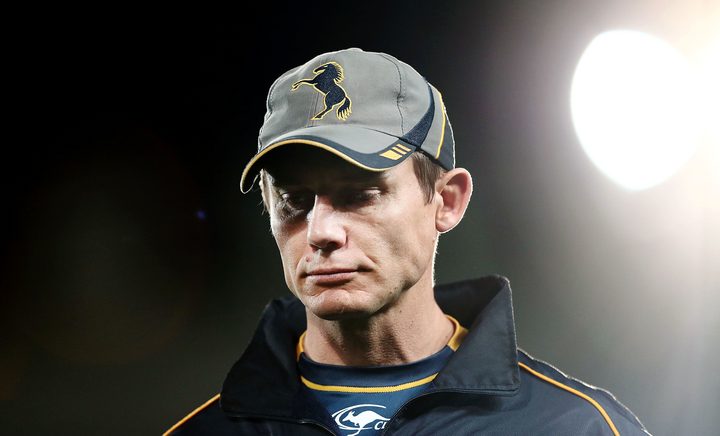 The Australian team struggled through their worst season in 60 years, slumping to a 4-9 win-loss record and a record-low No.7 in the world rankings.

The relationship between the two soured during the Wallabies' spring tour, where they managed only a win over Italy.

Larkham was fingered in a review by Rugby Australia (RA), which also resulted in Scott Johnson being appointed in a new position of director of rugby, overseeing Cheika, in an attempt to breathe new life into the Wallabies' World Cup campaign.

Continuing the cleanout, head of athletic preparation Haydn Masters resigned from his post with the team after four seasons.

"During the post-season review, they came back and looked at the Wallabies' performances ... when they had those hard conversations, there was a clear philosophical difference between their attacking styles and, ultimately, they agreed that for Bernie to move on was the right thing to do," said Castle.

"It's the right decision to make sure the team get put in the best position they can to prepare and compete in the World Cup this year."

Castle said Cheika consulted with Johnson, who would also be involved in the appointment of the new attack coach.

Larkham will shift immediately into a new role as national high performance coach adviser, working mostly with the under 20s, with Castle saying the door was still open to him applying for the head coach role, post Cheika.

Larkham has been the Wallabies' attack coach since early 2015, helping to steer the team to a surprise Rugby World Cup final later that year after less than 12 months under Cheika.

Castle said the remainder of the assistants, including defence coach Nathan Grey, forwards mentor Simon Raiwalui and skills coach Mick Byrne would stay with the team until the World Cup.

Larkham, boasting 102 Test caps, said he was disappointed to be forced out with the tournament just eight months away.

He has already been linked with a coaching role in Japan.

"Ultimately, Michael is responsible for the performance of the team," Larkham said in a statement issue by RA.

"We have differences in attacking strategy and overall game philosophy.

"We couldn't agree on these key points and it is in the best interest of the team that they receive clear and consistent messages from their coaches.

"I am obviously disappointed with this outcome, as I had chosen to pursue the experience of taking the Wallabies through to the World Cup, however I am pleased to be able to continue coaching and contributing to Australian rugby in this new role."