New Zealand sailors Peter Burling and Blair Tuke have made a winning start to their new Olympic campaign. 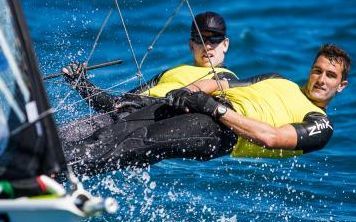 Gold medallists from the 2016 Games in Rio and stars of Team New Zealand's successsful tilt for the America's Cup in 2017, the 49er pairing sealed a dominant victory in the NZL Sailing Regatta on Sunday.

Burling and Tuke won six of the 11 races off Auckland's Royal Akarana Yacht Club, with an impressive worst result of fifth, to take top honours.

The four-time world champions finished 14 points ahead of nearest rivals Isaac McHardie and William McKenzie, with Josh Porebski and Trent Rippey a further eight points behind in third.

"It's been a little like riding a bike; a lot of things come back really quickly," Burling said.

"At the end of the day you need to put in a lot of time and that's we've been doing over the last four or five months.

Chasing back-to-back Olympic gold in Tokyo in 2020, Burling and Tuke have a busy 18 months ahead of them.

They soon head to Europe to measure themselves against the rest of the world's best in the 49er fleet, starting with April's Princess Sofia regatta in Palma, Italy.

"It's been really nice to put together a good performance this week and sail some better races," Burling said.

"It definitely felt like we were sailing a lot better by the end of the weekend.

"We have a list of things to work on before racing in Europe and we will just try to progress. It's about trying to get all the little details in place right now and keep pushing hard."

The majority of New Zealand's top sailors will also compete in Palma, including Gemma Jones and Jason Saunders, who took out the Nacra 17 at the Auckland regatta.

They started the day two points behind Liv Mackay and Micah Wilkinson and, although that pairing had boat damage, Jones and Saunders revelled in the strong sea breeze to win all four races on Sunday.

"It was really good to be racing some good quality opposition," Saunders said.

"We are making a few mistakes. We haven't raced in a while or done a lot of sailing in the last couple of weeks because Gemma hurt her leg.

"It's been good to get back into it and we are feeling like we are getting on top of things, finally."

Paul Snow-Hansen and Dan Willcox dominated the 470, winning seven of the eight races, but there were some encouraging signs from new women's combination Susannah Pyatt and Brianna Reynolds-Smith, who were second overall.

The event was also notable for the inclusion of kiteboarding.

The class has been included on the programme for the 2024 Paris Olympics, with Sam Bullock dominating on his way to victory in Auckland.