Wayne Bennett has denied going behind Anthony Seibold's back and making plans for the Rabbitohs' 2019 NRL season prior to being given the keys to Redfern. 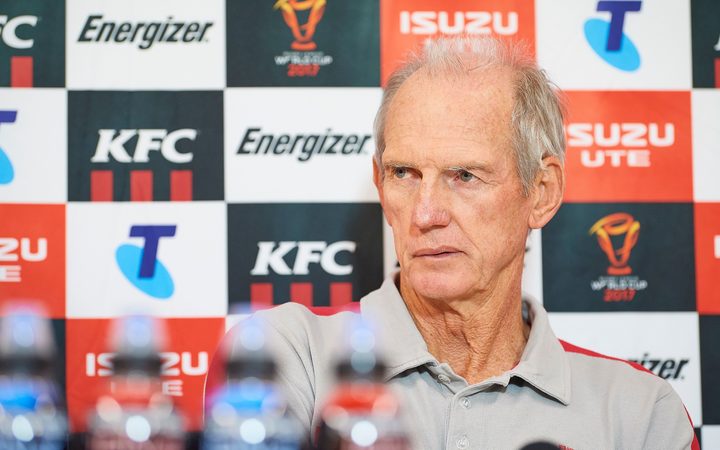 Bennett looked happy and relaxed as he pulled on the Rabbitohs' famous cardinal and myrtle for the first time on Tuesday, bringing the on-again, off-again coaching saga to a close.

Seibold on Sunday unloaded on Bennett in a News Corp Australia interview, claiming the seven-time premiership-winner had telephoned Damien Cook, Alex Johnston and Sam Burgess and had organised a pre-season training camp for the Rabbitohs squad, all while still coaching the Broncos.

Seilbold held those talks up as proof that Bennett had been secretly plotting to take over the Rabbitohs next year - well before their immediate swap was agreed upon.

The coaching trade was eventually pushed through after the Broncos sacked Bennett after their long-time mentor refused to quit.

While Bennett admitted he had talked to the three players while still under contract with the Broncos, he denied he had ever discussed plans for next season.

"Yeah I did on the request of Shane Richardson (Souths' general manager of football) because they were guys that were under contract," Bennett said.

"They wanted to keep them here and I was going to be the long-term coach here from 2020.

"I talked to them about contracts. Alex in his particular case, he was thinking about moving clubs in the middle of his contract. Souths weren't keen to lose him. Those are purely what those discussions were about."

The likes of Tevita Pangai Junior, Corey Oates and Matt Lodge remain close to Bennett and he said if they did follow him to Redfern at some point, it was not because he was trying to lure them south.

Broncos assistant Jason Demetriou and high performance manager Jeremy Hickmans are expected to sign with the Rabbitohs in the coming days.

The pair were put on gardening leave by the Broncos following Seibold's arrival, which saw Rabbitohs assistant Peter Gentle and head of performance Paul Devlin follow him to the Queensland.

"Not one (Rabbitohs employee) has been told to go gardening or not one guy has lost his job," Bennett said.

Bennett refused to reveal whether he would explore his legal options against the Broncos after they refused to pay out the entirety of his contract.