A late fluke goal has given Liverpool a derby win as Arsenal and Chelsea also claimed local bragging rights by beating their neighbours in the English Premier League. 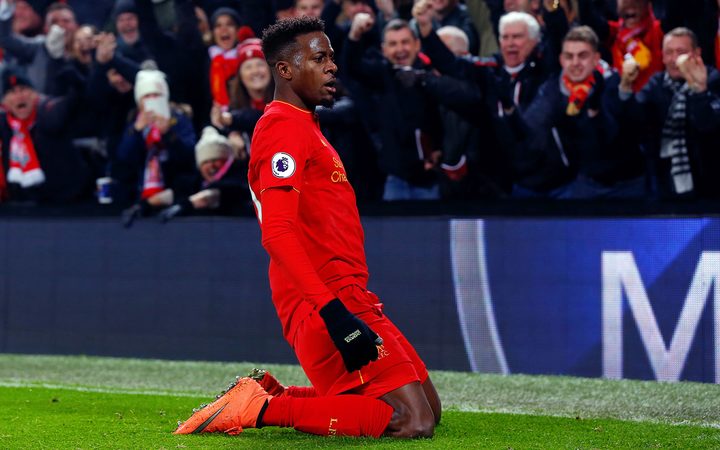 Divock Origi took advantage of a calamitous error by Everton keeper Jordan Pickford to head home the only goal in the 96th minute of the Merseyside derby.

"The game was what we expected, unbelievably tense, unbelievably hard," said Liverpool manager Juergen Klopp, who rushed onto the field to hug goalkeeper Alisson after the goal.

"Both teams had chances and a very weird goal.

"We got it and we'll take it, so a brilliant night."

Arsenal came back to beat Tottenham Hotspur 4-2 in north London while the southwest of the English capital belongs to Chelsea after a 2-0 win over last- placed Fulham.

Liverpool's victory lifts them within two points of leaders Manchester City with Chelsea and Arsenal moving above Tottenham to third and fourth, respectively.

The Liverpool rivals looked to share the points at Anfield when Trent Alexander- Arnold lofted one last ball into the Everton area.

It was cleared only as far as Virgil van Dijk, who sliced a looping shot that appeared to be heading over goal.

Pickford went up for it but fluffed his save and the ball fell for Origi, who came on late for his first Premier League appearance since August 2017, to nod into the empty net.

"In football these things happen every day, and anything can happen on the pitch," Everton boss Marco Silva said.

"It was a lucky, lucky day for Liverpool."

Second-half goals from Pierre-Emerick Aubameyang, Alexandre Lacazette and Lucas Torreira sent Arsenal past Tottenham in a feisty derby in which both sides had a lead.

"At halftime we were confident," Aubameyang told Sky Sports.

"We knew would could do it in the second half, come back, and we did it."

Lacazette and Aaron Ramsey came on to start the second half and the latter set up Aubameyang's 56th-minute equalizer.

Tottenham's Jan Vertonghen, whose handball led to Arsenal's penalty, was then sent off late for a second yellow card.

Pedro Rodriguez and Ruben Loftus-Cheek grabbed the goals as Chelsea bounced back from their first league loss last weekend at Tottenham by once again beating Fulham.

The Blues have lost just one of the 27 Premier League meetings with the Cottagers and are unbeaten in the last 17.

"Of course in the days after Tottenham it wasn't easy for me and the players but we lost a match after three-and-a-half months, that can happen," manager Maurizio Sarri said.

"Today it was important to react."