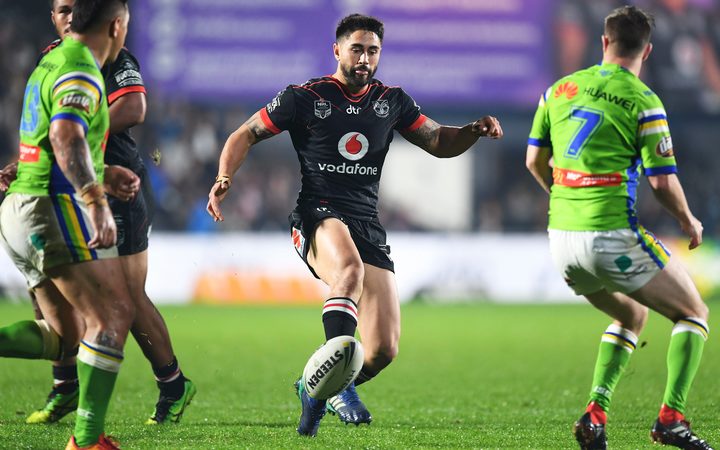 Warriors halfback Shaun Johnson has requested an early release from his National Rugby League contract after talks broke down with club management.

Johnson is unhappy the club hasn't shown interest in extending his contract beyond next season and wants to play elsewhere next year, rather than a ninth season in Auckland.

RNZ understands the 28-year-old had talks with Warriors chief executive Cameron George and coach Stephen Kearney this morning, just a day after the star playmaker vented displeasure at the club's attitude on social media.

The ball is in now in the Warriors' court as they consider whether they will grant Johnson's request.

The club turned down the opportunity to comment but, in what is a fast moving situation, the chances he will add to his 162 matches for the Auckland-based franchise appear to be diminishing by the day.

It is believed a resolution could well be reached on a "sooner, rather than later" basis, with rival NRL clubs circling to snare Johnson's signature.

Canberra had been touted as a potential home if he did leave the Warriors, however the Raiders said earlier this month that they were not formally considering him as an option.

Johnson signed a two year deal with the Warriors last year believed to be worth seven figures a season.

He made his debut in 2011 and has been the face of the club for the past five years.

His decision to ask for an early release comes after he posted a message about the situation to social media on Monday.

"I thought it's best I clear a couple things up regarding my situation at this stage with the Warriors," Johnson posted on Facebook.

"Secondly if you saw the article that came out a few weeks back ... they said they are in no rush to re-sign me. Since then they have told me again at this stage they won't be offering me anything.

"That means I get to spread my wings and see what's out there so right now that's what I'm doing!".