Ireland have beaten the All Blacks for the first at home, with a 16-9 win in Dublin.

The test pitted the top two sides in the world against one another and it lived up to the hype.

Ireland edged a rugged first half, and in a more open second half produced a classic try and kept New Zealand tryless for the first time in more than four years. 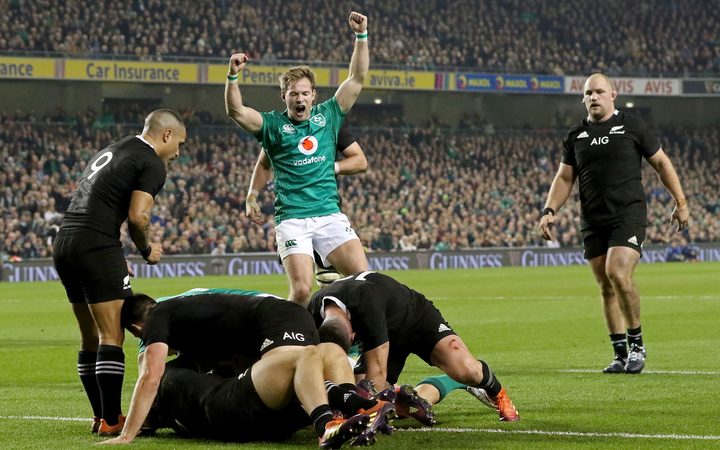 At a highly charged Lansdowne Road, Ireland became the only team to beat New Zealand twice since the All Blacks won a second straight Rugby World Cup in 2015.

The first time was in 2016 in Chicago, Ireland's first win over New Zealand in 111 years.

Even with that mental block gone, this victory was far more impressive: New Zealand was closer to full strength, and far more aware of Ireland's threats.

But it didn't matter.

Even after enduring a hugely physical first half that was exhausting just to watch, Ireland had the wherewithal to perfectly execute a try-scoring move from a lineout near halfway. 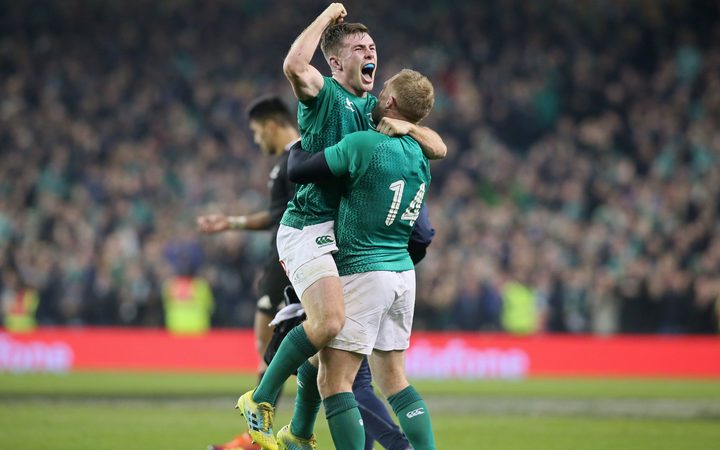 Ireland's Luke McGrath (L) celebrates with Ireland's wing Keith Earls on the final whistle in the test match between Ireland and New Zealand at the Aviva stadium in Dublin. Photo: AFP

First-five Jonathan Sexton switched play to Bundee Aki running back to the short side, and wing Jacob Stockdale chipped ahead.

He brushed past the surprised All Blacks, regathered and slid in from five metres out.

Sexton converted from wide out for 16-6 with half an hour to go, and put the pressure right back on the All Blacks.

But they limited them to just one more penalty.

No.8 CJ Stander hailed a huge defensive effort as Ireland claimed their first win over New Zealand on home soil.

"We always pride ourselves in attack but today our defence was unreal," Stander said.

"To keep them scoreless in tries was unbelievable. The boys really stood up."

Check out how the match unfolded here with our live blog from Jamie Wall.