Outside back Nehe Milner-Skudder is to miss the Māori All Blacks matches against Brazil and Chile after hurting his shoulder in yesterday's All Blacks Test against Japan. 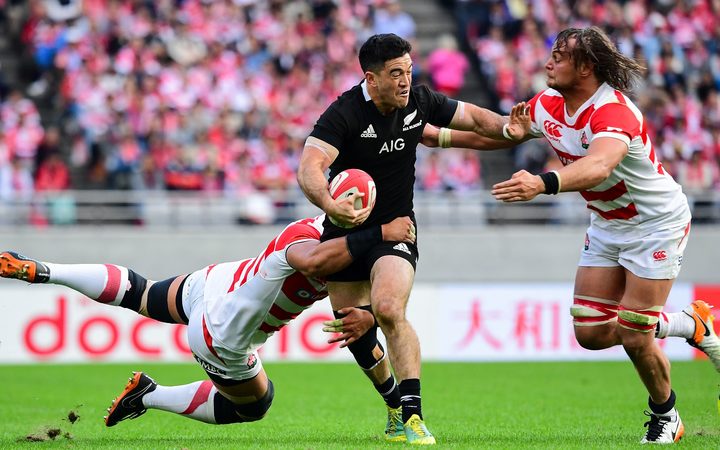 Nehe Milner-Skudder playing for the All Blacks against Japan. Photo: Photosport

All Blacks head coach Steve Hansen said it was too early to know the extent of Milner-Skudder's injury and he would return to New Zealand for further assessment.

Meanwhile, Jackson Hemopo, Bryn Hall and Matt Proctor will return to New Zealand with the bulk of the Japan squad today before flying out to Sao Paulo, Brazil to join the Māori All Blacks. The remainder of the All Blacks squad and management flies to London today.

Milner-Skudder's return to New Zealand has meant a call-up for Auckland speedster Jordan Trainor to join the Māori All Blacks for the remainder of their tour. He leaves New Zealand tomorrow.

The Māori All Blacks were successful in their outting against the USA Eagles this morning after a 59 to 22 win despite some worrying signs after ill-discipline plagued the side throughout the match.

The Māori outscored the Americans nine tries to three but were penalised with three yellow cards to captain Ash Dixon and debutants Pari Pari Parkinson and Robbie Abel.

With improvement clearly needed in the side's structures Dixon said he was happy the eight debutants in the side got good game time.

"We had to work pretty hard for that, the USA team came out pretty hot so we really had to work hard. We scored some good tries there but at times I was pretty disappointed with the way we defended,"

"We'd like to do this more and more and get a few more people to the game and encourage rugby in the US because I think once they figure out rugby's a great game, they're going to be a powerful weapon."

Lock Isaia Walker-Leawere was a stand-out contributing to the onslaught in the second half after scoring two tries in five minutes.

The Māori will continue their tour by playing Brazil in Sau Paulo next week and Chile in Santiago a week later to round out their tour.