Steve Pearce slammed a pair of home runs and David Price tossed a seven-inning gem to power the Boston Red Sox to a 5-1 win over the Los Angeles Dodgers and their fourth World Series title in 15 years. 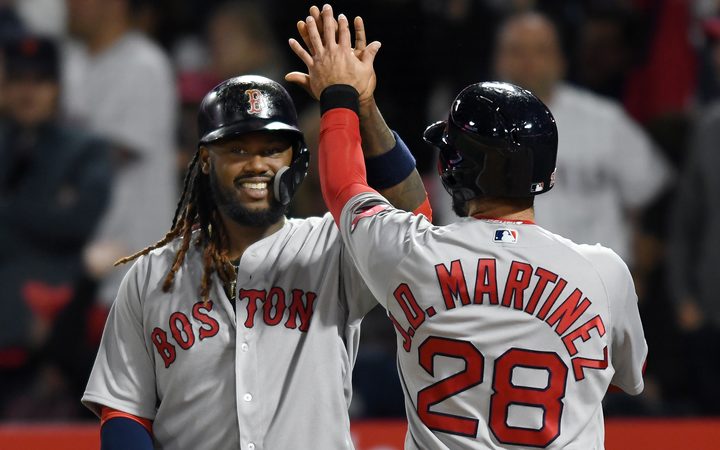 The Red Sox, after winning a franchise record and Major League Baseball best 108 games during the regular season, carried their domination all the way to the World Series and overwhelmed the Dodgers 4-1 in the best-of-seven series.

The Red Sox clinched their ninth World Series title with a lethal combination of power and pitching.

Game Five starter Price surrendered one run on three hits in seven plus innings to collect his third straight post-season win, while all the Red Sox runs were scored via home runs.

Pearce, who was named the World Series most valuable player, gave Boston a 2-0 lead they would never relinquish with a two-run blast in the first and added a solo shot in the eighth. Mookie Betts and J.D. Martinez hit solo home runs.

Price said winning the World Series was the whole reason he came to Boston.

"Seeing all these grown men over there just acting like little kids, that's what it's all about," he added. "To come out on top the way we did is unreal.

"This is why I came to Boston. I know it is a tough place to play."

His two stellar World Series starts, where he dominated the Dodgers lineup, also put to rest any questions about his ability to perform in the postseason.

"I hold all the cards now. And that feels so good."

The Dodgers and their fans arrived at Chavez Ravine on Sunday knowing only 13 teams had clawed their way back from 3-1 deficits to win a best-of-seven post-season series.

The last to do it was the Chicago Cubs against the Cleveland Indians in 2016 as they claimed their first World Series crown in 108 years.

The chances of a Fall Classic pitchers duel seemed unlikely when both starters were clobbered for first-inning home runs.

After Andrew Binitendi singled, Pearce took the first pitch he saw from Kershaw and launched into the center field bleachers for a 2-0 lead.

"Baseball is a funny game, great things can happen and I am very blessed to be here right now," said Pearce, who has played for every team in the American League East.

"This is the best feeling in my life. This is what you grow up wishing that you could be a part of, something like this. With that special group of guys out there, to celebrate with them, that was awesome."

The Dodgers, who were beaten by the Houston Astros in last season's World Series, hit back right away when David Freese crushed a leadoff homer to get Los Angeles on the scoreboard.

The first-inning fireworks gave way to the pitching battle many had predicted with Price and Kershaw settling down and tossing four shutout innings.

Boston seized control in the sixth when Betts, in an 0-13 slump at the plate, smashed a solo shot while Martinez connected for a leadoff homer in the seventh.

Kershaw, who has never lived up to his Cy Young credentials in the postseason, endured another rough outing and gave up four runs on seven hits in seven innings of work.

"There's only one team that can win and we know that but it just hurts worse when you make it all the way and get second place," said Kershaw, whose future with the Dodgers is in doubt.

"So having done that two years in a row now, it doesn't make it any easier."