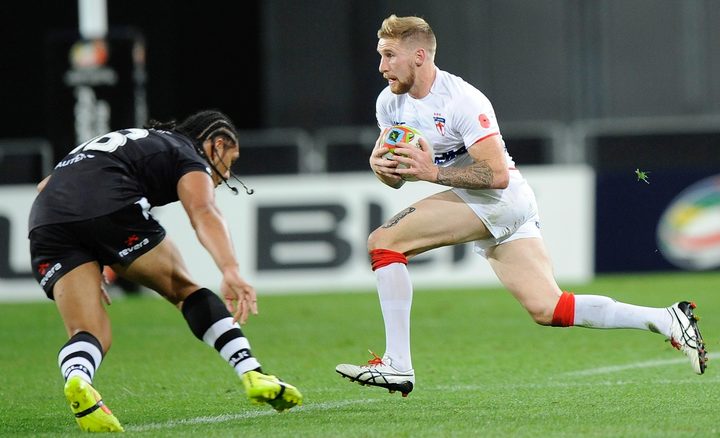 Gildart raced almost 50 metres at the KC Stadium on Sunday (NZ time) after exploiting a gap in the Kiwi defence following a brilliant offload by Canberra-bound Jon Bateman.

The young Wigan centre then skipped past New Zealand captain and fullback Dallin Watene-Zelezniak for the decisive try 12 minutes from time.

England got off to the perfect start when Sam Tomkins, recalled after a four- year absence, touched down under the posts in the fourth minute finishing off a fine move from the hosts.

The Kiwis, fresh from the win over Australia in Auckland two weeks ago, responded seven minutes later when Shaun Johnson and Kodi Nikorima combined to put Esan Marsters into a gap left by Josh Hodgson's poor defensive read.

Two minutes later the tourists looked to have increased their lead when Tommy Makinson lost the ball in his own in-goal with a badly executed offload, but Jordan Rapana was adjudged to have knocked on before he touched the ball down.

England continued to let themselves down with some sloppy play and after an offside penalty helped the Kiwis move deep into the England half, skipper Watene-Zelezniak put his side in front for the first time.

Nikorima showed his class with a sharp pass that caught England napping and the Penrith flyer sprinted over untouched from 20 metres.

But England hit back on the stroke of halftime through a penalty try when Jake Connor was adjudged to have been impeded as he crossed the line by the video referee Ben Thaler.

The centre appeared to have been held up by Johnson and Watene-Zelezniak but the skipper was penalised for sliding in with his knees Connor added the extras to lock up the scores at the break.

Johnson and Connor exchanged penalties early in the second half before the Warriors playmaker added another two points following an offside infringement against Thomas Burgess.

The teams meet for the second Test at Anfield next Sunday.