Israel Folau stunningly confessed to enjoying the backlash from his controversial anti-gay posts after agreeing to a new four-year deal to remain in Australian rugby. 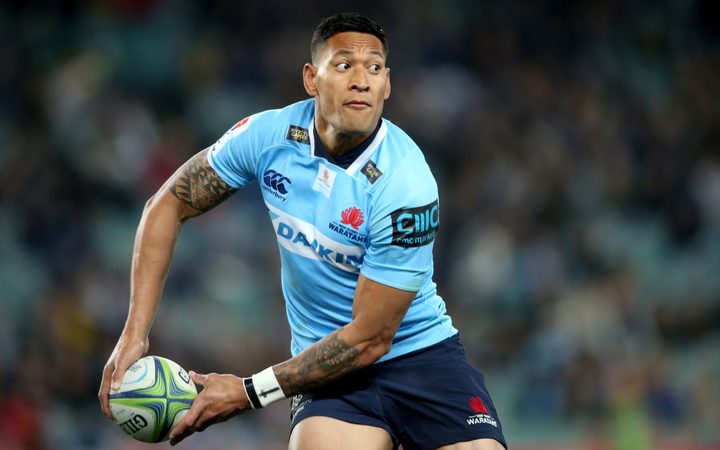 Israel Folau has recommitted to the NSW Waratahs and Wallbies until 2022 Photo: © Clay Cross / Photosport Ltd 2018

The superstar code-hopper is off limits to NRL clubs after ending months of speculation over his future on Wednesday with a recommitment to the Wallabies and NSW Waratahs until at least the end of 2022.

"It's a relief and I have made known to my agent that I am obviously very interested at staying on in the game," Folau said in Tokyo ahead of Saturday's Bledisloe Cup clash with the All Blacks on Saturday.

"It's something that I have enjoyed being a part of."

The former State of Origin and Australian rugby league Test player had been in the sights of several NRL clubs, as well as the Queensland Reds and cashed-up rugby franchises in Europe and Japan.

The 29-year-old admitted he wrestled with the decision at times during protracted contract negotiations with Rugby Australia, who he clashed with in April following a series of provocative social media posts from the devout Christian.

"It's a bit of a rollercoaster year for me, more so off the field with what's been happening," Folau said.

"But, to be quite honest, it might sound a bit crazy, but I kind of really enjoyed what was happening off the field, not that it happened on purpose.

"But my identity is based around my faith in God and I truly believe that from deep down inside what was happening off the field, even though it was challenging and it was hard, it was actually moulding me into the person in becoming stronger and it actually taught me a lot of things that I needed to learn, and I'm still learning now.

"Obviously a lot of people will say negative things about what was happening, but it taught me to actually love and forgive them for obviously not agreeing and that's something that I've learnt to take on."

It's unknown if RA boss Raelene Castle will stipulate in the formal contract that Folau must tone down his posts, but the three-times John Eales Medallist insisted the pair could continue working together.

"I respect who she is and she's doing a really great job running the game so far," he said.

Despite the controversy and drama swirling around him, Folau has managed to produce some of the most electrifying rugby of his career in 2018.

"Going onto the footy field, probably a lot of people would probably say that it would affect my rugby, but I've never felt so much peace going onto the field," Folau said.

The retention of the 69-Test superstar comes hot on the heels of RA's re-signing of several other key players in 2018.

Test captain Michael Hooper and young tighthead prop Allan Alaalatoa have both signed on for another five years, while playmaker Bernard Foley last week announced he was sticking around in Australia until at least next year's World Cup in Japan.