Usain Bolt's A-League bid could end as soon as this week after the Central Coast Mariners excluded the Olympic great from team training until a contract offer impasse is resolved. 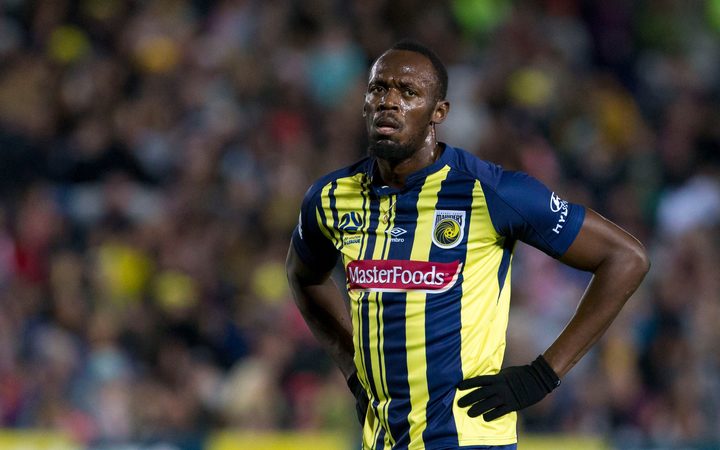 The Mariners appear keen to bring a decision on Bolt's future to a head after his management reportedly pressed for a contract in the wake of his two goals in a recent trial match.

In a statement on Tuesday, the club finally confirmed they had tabled an offer to the Jamaican sprint superstar, although it's reportedly for a meagre $150,000 with the majority from Football Federation Australia's marketing fund.

That's a far cry from the $3 million written about when he began his indefinite trial with the Mariners in mid-August, when the club indicated a decision on a contract for Bolt was more likely in January.

The club admitted in Tuesday's statement they were unlikely to reach an agreement unless a lucrative third-party deal can be found.

Meanwhile, with the season now underway, some gloss has come off the experiment, with an improving Bolt still short of A-League standard and the Mariners keen to keep their team focused.

"To ensure that there is no distraction to the Hyundai A-League squad in preparing for this weekend's match vs. Melbourne City; Usain Bolt will not attend team training this week, until and if, the Club and Usain Bolt can agree to terms and formalise an arrangement," the Mariners statement said.

Unless a big backer is found quickly, Bolt will need to decide whether he is prepared to put his head down and keep working hard to improve for minimal money to pursue his football dream or look to more lucrative options overseas.

"Without the financial contribution of an external third-party, it is unlikely that Usain Bolt and the Central Coast Mariners will agree to terms," said the club.

Talks were continuing with Bolt's agent Ricky Simms and the club said he had made "great progression" in his time at Gosford.

But playing options at this time of year are limited and they were looking at ways to give him "more individual intensive training and competitive game time" away from the first team.

"Mariners coach Mike Mulvey has already made it plain he won't be rushed into the A-League at the expense of of more accomplished players.

"Do you think he'll get in our front three? We've got a very good front third," said Mulvey after the Mariners opening draw with Brisbane Roar on Sunday.

Mulvey suggested Bolt would find it difficult to be promoted above the likes of Ross McCormack, Tommy Oar, Connor Pain, Michael McGlinchey and Matt Simon.

Meanwhile Mariners players say they are happy for the Bolt experiment to go on.

"It's not a distraction for the players. We all came to training this morning and no one has asked any questions (about it). It's more a distraction for you than for us. We are looking forward to Saturday's game," Mariners defender Kalifa Cisse told reporters on Tuesday.