Peerless at her best, Australia's Sharni Layton says there were times when anxiety and depression prevented her from leaving the house despite her effervescent approach on a netball court.

Layton, widely regarded as one of the best defenders in the world and a two-time world champion, announced her retirement from the sport in July after a six-month break.

During that time the 30-year-old missed a home Commonwealth Games and was still coming to terms with the effects her 14-year career was having on her mental health.

"I'd get upset easily, I'd had a few breakdowns in a row," Layton told BBC Sport.

"I couldn't really leave the house. My brain would just switch off and things wouldn't come to me.

"There would be nothing that I could do to change that and I would be like 'why can't I think, I know I have a personality, why am I just sitting here?' 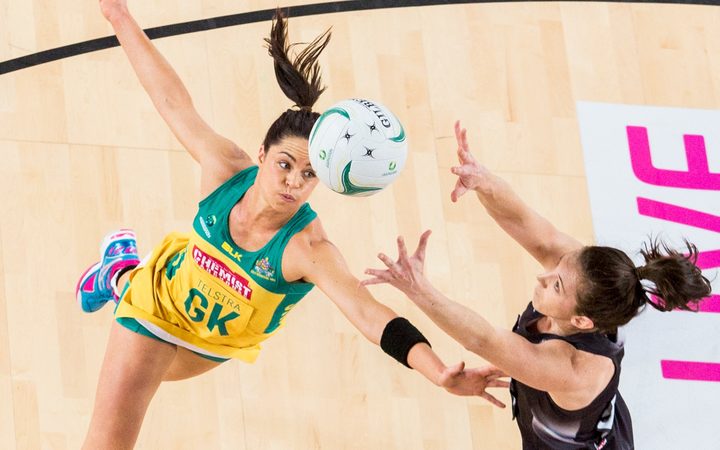 One of the most recognisable faces in netball, Layton made her international debut in 2011 and went on to make 46 appearances for Australia, winning Commonwealth gold in Glasgow in 2014, and World Championships in 2011 and 2015.

She also won two domestic league championships with the Adelaide Thunderbirds and was named international player of the year in 2016 and 2017, underlining her reputation as one of the finest players on the planet.

However, it is only now that she feels comfortable talking about her struggles after embarking on a new career in Aussie Rules for Collingwood Football Club.

'It took so much courage to ask for help'

'Sharns', as she is known by those close to her, says she had aimed to play in the Commonwealth Games on the Gold Coast before realising the scale of her problems.

Having pushed the issues she faced to one side because "that is what you do in sport", Layton says she finally recognised that she had to take action.

"It is when those down days become more than your up days that you need to do something about it," she said.

"My best friend called me and I just threw my phone against a wall because I couldn't handle answering her call.

"I should have been the happiest person alive. I was arguably one of the best players in the world and in my country. I had a great life. I have a beautiful family, three gorgeous cats, so I was like 'why am I this unhappy when all of this is so amazing?'"

Layton's next port of call was Angie Bane, the wellbeing manager at the Australia Diamonds.

It was a phone call that would prove to be one of the most important of her life. She says the hardest thing she has done in her life was ask for help.

"It took so much courage [to call somebody] because I have always been a headstrong person that has always been like 'I'm Sharni Layton, I prove people wrong'.

"I called her up and I was like 'listen Ange, I'm not good, I'm really unwell'. I had lost a lot of weight and she just went 'look Sharns this is what we are going to do', and she put a plan in place."

"My psychiatrist taught me the scientific background about my personality and why I tick the way I do," she said.

"Being an athlete you need something tangible to work on, so as soon as I saw that, I was like 'this is amazing, there is something unbalanced and something I can work on to get better'.

"My sister, my mum and dad, and my really close friends are like 'we have got our Sharni back' and that hurts to say because I am sad they lost me for a little bit.

"But I am just so grateful that I had the support around me to be able to get myself back on track."

Layton says she wants to encourage fellow athletes to seek help should they feel they need to.

"My psychiatrist changed my life. I wish I had started seeing one five years ago to be honest. Now I am just trying to break the stigma around it," she said.

"If I couldn't perform because I had done my ankle it wouldn't be fair on the team, and this was no different."