Big-serving Karolina Pliskova used her most potent weapon to damaging effect as she overwhelmed defending champion Caroline Wozniacki 6-2 6-4 in their opening round robin match of the WTA Finals in Singapore. 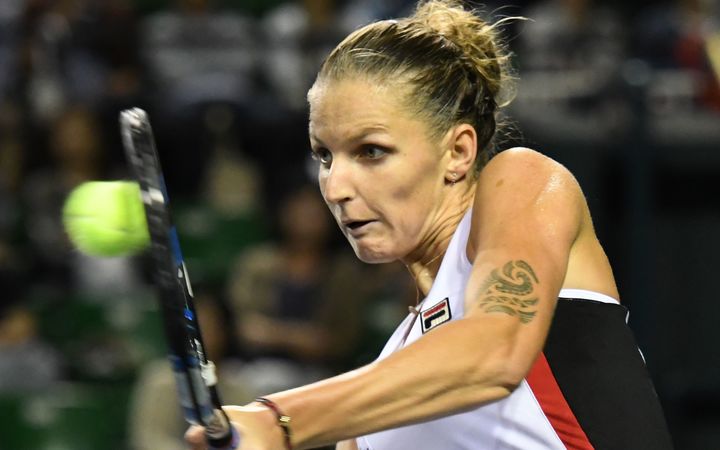 In the other White Group encounter at the eight-woman event, Elina Svitolina tore up the form book with a brilliant display of serving and retrieving to register a 6-3 6-3 victory over Petra Kvitova.

Wozniacki had beaten Pliskova in the semi-finals a year ago and held a 6-3 lead in head-to-head encounters between the pair but the former world number one refused to let her Danish opponent settle in a ruthless display of big hitting.

"I felt pretty good from the baseline today, so it wasn't only down to my serve," Pliskova said in a post-match interview.

"The game was solid from my side and she looked nervous at the start... it's always tough to defend the title for everybody, so I am happy with my performance today."

Pliskova's power proved too much for Wozniacki for most of the match as the Czech, who also moved well, secured two breaks in a row to stake an early lead and kept the tenacious Dane at arm's length to claim the opener in 36 minutes.

The Czech continued her onslaught to break immediately at the start of the second set, staving off three break points against her to consolidate the advantage as Wozniacki tried desperately to get back on level terms.

The Dane used her brilliant backhand to create further openings on the Pliskova serve but a combination of tightness on key points from Wozniacki and solid groundstrokes from the Czech prevented the champion from gaining a foothold.

Pliskova earned two match points in the ninth game but Wozniacki survived them both to ensure the Czech would have to serve for the match, which she managed after saving two break points by sealing victory with a clubbing ace.

"Matches against Caroline are always tough and the last time we played here, I had a lot of chances but did not convert them," added Pliskova, who saved all 10 break points the Dane forged against her.

In the early match, 24-year-old Ukrainian Svitolina came into the White Group opener on the back of seven straight defeats by left-handed Kvitova, but she capitalised on her opponent's erratic play to record a stunning triumph.

Svitolina, making her second appearance at the season-ender, appeared focused and determined to make amends for a lacklustre display a year ago when she exited in the round robin phase.

Both players appeared nervous at the start of the match as they struggled to find their timing on a court playing faster than ever, but Svitolina settled after dropping her opening service game and never looked back once she took the opener.

The Ukrainian continued to play an error-free brand of no-risk tennis to claim her fifth game in a row to open the second set and once she forged her fourth break of the match in the sixth game, the writing was on the wall for her opponent.

"You need to play at the best level you can imagine because everyone is very strong. From the beginning you have tough matches and even if you don't start well, you are still alive and fighting for a semi-final spot," Svitolina added.

Svitolina, who suffered a minor health scare when she felt dizzy during her post-match news conference, will take on Pliskova on Tuesday, while Wozniacki will hope to get her title defence back on track against Kvitova on the same day.