The New Zealanders were pipped by just 0.6sec in the final by perennial rivals Australia, while the Kiwi women's team sprint finished an impressive fourth, in the first time into a World Cup medal decider. 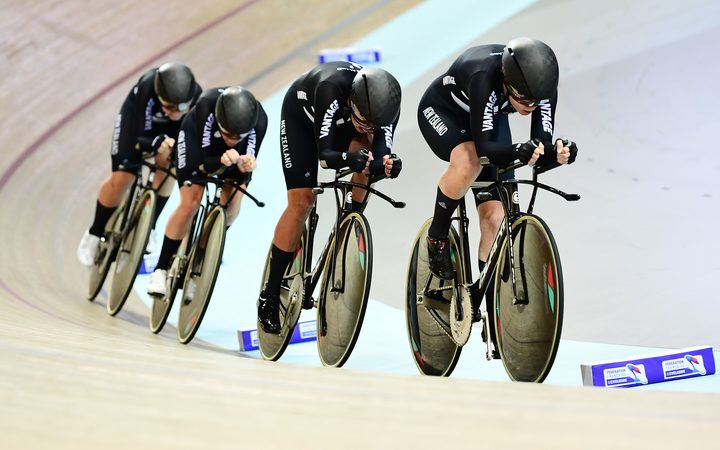 It proved a mixed day with a mechanical mishap when Sam Webster's foot unclipped from the pedal, costing the men's team sprint any chance, while the men's team pursuit could not replicate their first day form, finishing sixth.

The new-look women's team pursuit, under the guidance of new coaches Ross Machejefski and Alexandra Greenfield, qualified fastest yesterday. Today they disposed of Germany in the first round in 4:20.143, similar to their qualifying effort.

Australia set the marker with a 4:18.441 effort to beat the Italians in the other clash to take the favourites tag into the final.

Australia opened the narrowest of margins after the first 1000m but there was just a blink of the eye separating the two at 2000m with the gap at only 0.7s at 3000m.

The Kiwi quartet of Kirstie James, Holly Edmondston, Rushlee Buchanan and Bryony Botha fought back to almost pip the Australians in an exciting final four laps. While they had to settle for second in 4:17.560 the quartet were rewarded not only with their first World Cup silver medal but a New Zealand record in the process, bettering the previous time set at the Rio Olympics.

"It is a really good starting point," said the experienced Buchanan. "We are a fresh team and not tapered. It is the first time this group has ridden together, and while we had a few hiccups in the first two rides, we were calm and collected today.

"It is a testament to the work we have been doing and importantly the culture we have been creating, and the benefit of that came out in the final when we laid it down and had a ride we could be proud of."

"The turning point has been the culture shift. We have developed a lot of trust with each other. A fresh start with new coaching staff and Cycling New Zealand staff in general has made a big impact in how we operate which I think is positive moving forward."

They qualified fifth fastest in 33.622 with the pace set by Australia in 32.845. The Kiwi pair upset the host nation in the first round with their 33.325 only 0.2 off the national record, but qualified them for the bronze medal ride. They managed a solid 33.477 but were edged by Ukraine while Russia pipped Australia by 0.001 in the final.

"We were close to our best ever time tonight and it was a personal best for me so we are happy with that but also really looking forward to the chance to ride again next week."

The men's team sprint, looking to build on their win at the Oceania Championships, suffered from the vagaries of mechanics to railroad their World Cup start.

They had a false start in their qualifying ride, to earn a re-start, but in the re-run Sam Webster's foot slipped out of the pedal. With teams only entitled to one re-run, he had to continue, reclipping but losing nearly 20m to the flying Ethan Mitchell in first wheel.

While Webster attempted to recover and Eddie Dawkins put in the fastest third-lap effort of all riders, the combination could only manage 45.153s to finish 12th fastest of the 15 teams.

"It is just one of those things in this sport, you only get one second chance," said Cycling New Zealand high performance director, Martin Barras. "The upside is that we know the boys are in good form with Ethan and Eddie very fast. The downside is that it puts them under some pressure in terms of points qualifying now and they will have to do well in Canada next week."

The men's team pursuit were beaten by Olympic champions Great Britain in their first round after the top six teams were separated by one second in qualifying.

The Kiwis were not as impressive as qualifying with a 3:56.268 only sixth best, while Rio bronze medallists Denmark beat the British in the final.

"We were looking to be more competitive tonight," said coach Brendon Cameron. "We qualified in a 3:55 and were surprised that basically the top six nations were within one second of each other, with everyone here with their A teams.

"We had a tough draw but no excuses because we didn't execute like yesterday. We were looking to go faster but we didn't back-up.

"While we will learn from this it was a little bit disappointing. We need to recover and head to Milton and front up again. We are here in the form we have for this time of year with new riders but we have to present as well as we can which didn't quite happen today."

Michaela Drummond finished eighth in the 20km Points Race, featuring in the most sprint finishes but the top seven riders all managed to put a lap on the field for the bonus 20 points.