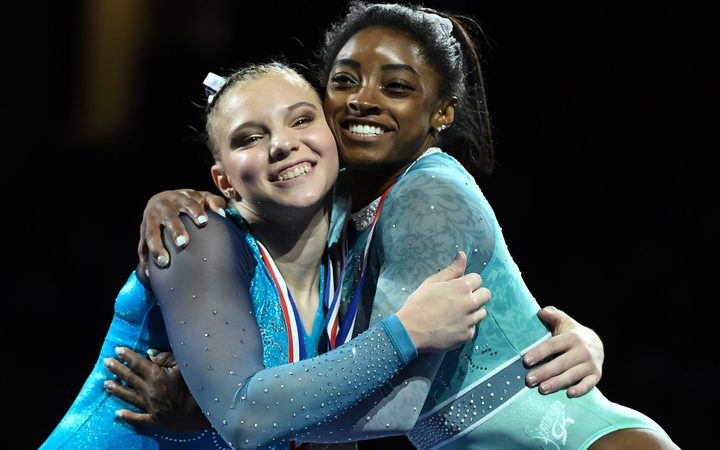 Gymnasts Simone Biles and Jade Carey share a hug on the awards podium at a recent competition in Boston. Photo: Photosport

Mary Bono was criticised after appearing to oppose Nike's advertising campaign with former NFL player and equal rights activist Colin Kaepernick, who was the first NFL player to kneel during the American national anthem in protest of police brutality towards black Americans.

He describes himself as a fighter against racial injustice.

She was appointed as interim president and chief executive on Friday.

"My withdrawal comes in the wake of personal attacks that, left undefended, would have made leading USAG a liability," Bono said.

Bono, 56, had also previously worked for a law firm which represented USA Gymnastics and its ex-team doctor Larry Nassar during a sex abuse scandal.

Nassar has been sentenced to more than 300 years in jail for abusing gymnasts.

In a statement confirming her resignation, Bono claimed she had seen "assaulting behaviour" by a coach when she was a young gymnast.

"It is with profound regret, coupled with a deep love for the sport of gymnastics and respect for those who aspire to be great gymnasts, that I today tendered my resignation," Bono said.

"I would have brought a fire in the belly to ensure that no-one as taken with gymnastics as I was at that age, should have to choose between abuse and ambition, or between properly speaking out and promoting personal success."