Eighteen months after Jesse Bromwich and Kevin Proctor's illicit substance scandal threatened to kill off their Kiwis careers, Michael Maguire has highlighted them as representative of the side's rebuild. 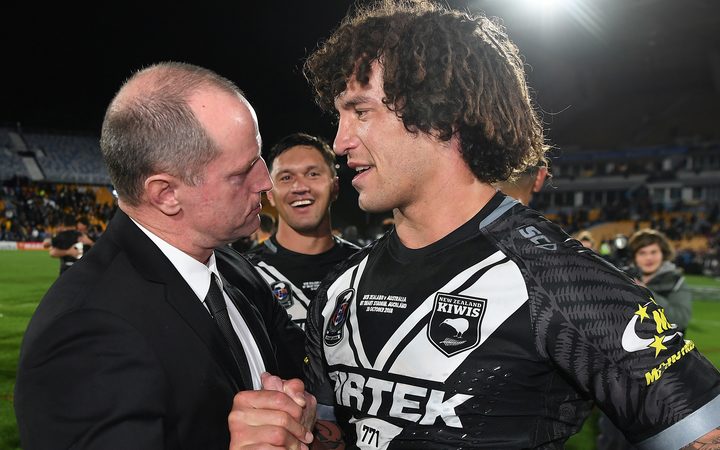 At a time when New Zealand were being pegged as vulnerable and in danger of being usurped by Tonga, they produced a rousing 26-24 rugby league test victory over Australia on Saturday.

After a raft of representative retirements and missing the likes of Roger Tuivasa-Sheck, Nelson Asofa-Solomona and Issac Luke, the unfancied Kiwis rolled the world champions for the first time in three years.

The Kiwis brand copped a black eye after Bromwich was stripped of the captaincy and he and Proctor were banished from the World Cup after being caught on CCTV snorting a substance off a drug dealer's phone after last year's Anzac test.

Saturday's game was their first back in Kiwis colours and coach Maguire said their ability to come back from a low point in their careers was representative of the character he wanted in his team.

"People like Kevin Proctor and Jesse Bromwich, they've faced adversity and what we saw, to come back in form the way they did," Maguire said.

"A lot of young kids, unfortunately, at some stage make a mistake and those two boys have definitely put their hands up and turned a bit of adversity into strength and where we want to be.

"Both of those boys performed very well."

Next Saturday's test between Tonga and Australia at Mount Smart is already sold out, prompting fears the Mate Ma'a were winning the battles for the hearts and minds of the New Zealand public.

But the likes of Joey Manu and Brandon Smith proved they were ready to be the faces of a new generation of Kiwis and there was light at the end of the tunnel.

New skipper Dallin Watene-Zelezniak - who put in an inspired performance against the Australians - said it was up to the side to rebuild their good standing.

"We came into camp to build foundations not only for us going forward but the Kiwis coming through and the kids after that," Watene-Zelezniak.

"We want to give this nation what they deserve.

"I can't really put it into words, we just came together."