A Joey Manu-inspired New Zealand have brought Australia crashing back to earth with a 26-24 upset in their rugby league test at Mt Smart Stadium. 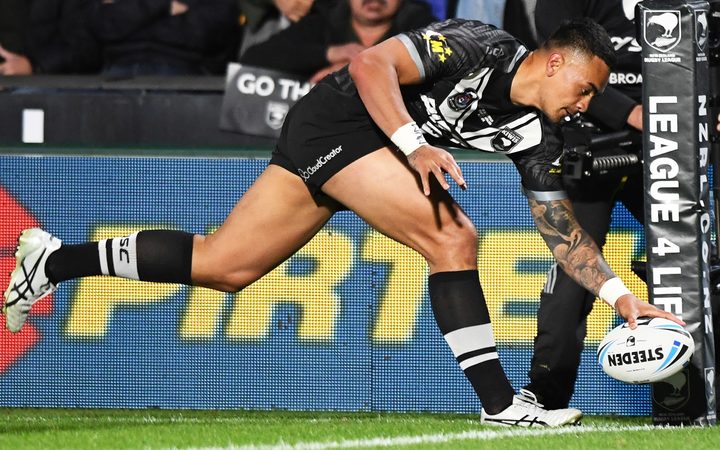 The Kangaroos had their 13-game winning streak broken on Saturday and tasted their first test loss under coach Mal Meninga.

After the retirement of a golden generation of players including Johnathan Thurston, Cooper Cronk, Billy Slater and Cameron Smith, the Aussies are facing a rebuild.

Manu upstaged his Sydney Roosters teammate, superstar Latrell Mitchell, scoring one try and setting up another in a rampaging performance, while Shaun Johnson was named man of the match.

The Kiwi forwards, led by Jared Waerea-Hargreaves, Jesse Bromwich and Martin Taupau, dominated while David Klemmer was the only Aussie forward to make more than 100 metres.

The Australians scored two late tries through Felise Kaufusi and James Tedesco for a tense final two minutes, but the scoreline belied the Kiwis' dominance.

The result will go a long way to restoring the New Zealand public's faith in the Kiwis after a slew of poor results and off-field issues.

It was the New Zealanders' first win over Australia since the 2015 Anzac test.

After the Kangaroos took a 12-8 lead into halftime despite the Kiwis controlling possession and territory, the home side hit the front when hooker Brandon Smith burrowed over in the 54th minute.

And when a light-stepping Johnson created an overlap, Esan Marsters put the Kiwis up 20-12.

Johnson again was allowed to run across field, with Manu popping a magical offload in traffic to send Jordan Rapana over to give his side what proved a winning lead at 26-12.

Earlier, the Australians started like a freight train, with Mitchell putting Valentine Holmes over in just the third minute.

The Kiwis were twice denied by the video referees in the first half - skipper Dallin Watene-Zelezniak controversially turned down after Manu was ruled to have knocked on after a spectacular pick-up and chip.

Manu did give his side an 8-6 lead when he produced a powerful fend to run over Mitchell in the 35th minute.

The Kangaroos produced something out of nothing when Daly Cherry-Evans, Tom Trbojevic and Dane Gagai combined on the stroke of halftime to make it 10-8, however only for the Kiwis powered home in the second half.