Australia have edged New Zealand 26-24 in a nail-biting finish to win the women's rugby league test at Mt Smart Stadium in Auckland. 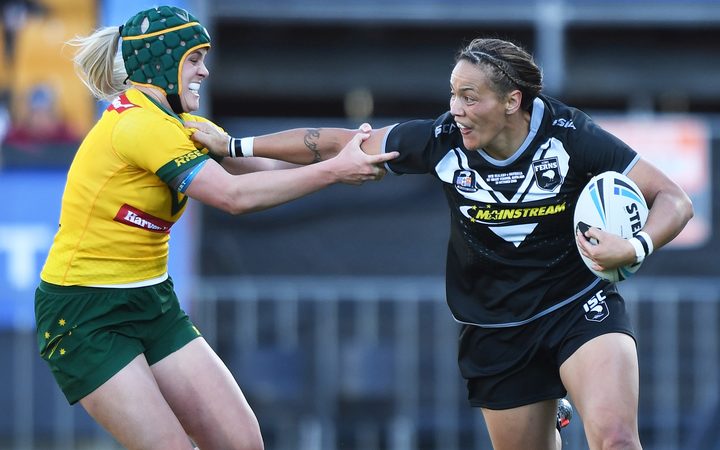 However, with less than five minutes on the clock, Isabelle Kelly broke through and outpaced the tiring Ferns defence out wide to wrap up the win for Australia.

The world champions had started strongly, Julia Robinson crossing after just six minutes as the Jillaroos made the most of their pace out wide.

Skipper Ali Brigginshaw added a second try just five minutes later, dancing her way through the New Zealand defence to dot down close to the posts as Australia opened out to a 12-0 lead.

The Kiwi Ferns finally hit back as the half-hour mark approached, winger Langi Veainu latching on to Raecene McGregor's looping pass out wide to dive over in the corner.

But although the Ferns pressed hard as half-time approached, the Jillaroos' defence held strong and they took a 12-4 lead into the break.

The New Zealanders roared back after the restart, Annetta Nuuausala dotting down after just six minutes before Veainu crossed for her second two minutes later.

Tamzin Gray's 52nd-minute effort restored the Jillarooos lead at 18-14 but the Kiwis hit back through Maitua Feterika barely three minutes later to level the scores.

The match continued to see-saw, Kelly blazing away on a 70-metre run to score in the 65th minute for the Jillaroos before Amber Kani's try and Apii Nicholls' conversion gave New Zealand the lead until Kelly crossed for her second try with five minutes remaining.

In the first match of Saturday's trans-Tasman triple header, the Junior Kangaroos beat their Kiwis counterparts 40-24.