The New Zealand team won two gold medals on the opening night of the Oceania Track Cycling Championships in Adelaide. 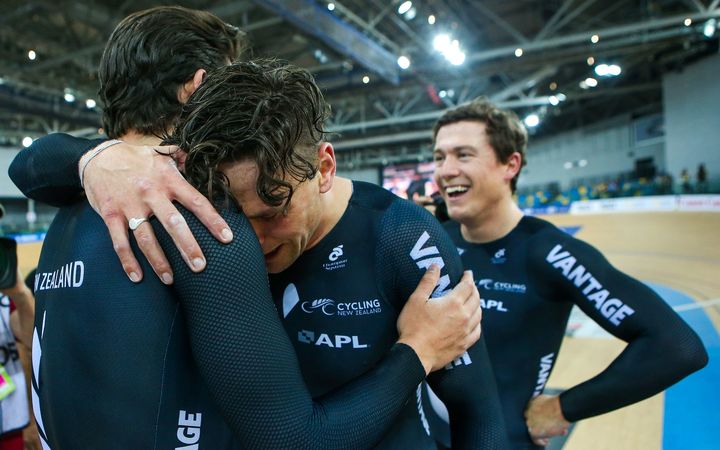 The men's team sprint trio of Ethan Mitchell, Sam Webster and Eddie Dawkins returned across the Tasman to win the final, in the first competition ride since their Commonwealth Games triumph on the Gold Coast in April.

Earlier the men's team pursuit combination of Aaron Wyllie, Tom Sexton, Sam Dobbs and Harry Waine, who are largely development riders with the team only put together a week ago, upset the Australians in a tight final battle after they were second fastest by some distance in qualifying.

Focus was on the star men's sprint trio, who improved on their afternoon qualifying effort of 43.839s by 0.2s in the final to hold off a strong Australian combination of Nathan Hart, Jacob Schmid, Patrick Constable by a narrow margin in the final. It was their sixth Oceania title in a row and ninth in all.

"It was good to come out and improve on our qualifying ride," Sam Webster said. "It is our first team sprint in competition since the Commonwealth Games, so it was going to be a shock to the system. So, to lift again in sub-optimal conditions on a track that can be quite hard to master technically, I was pleased with how we rode this technically tonight."

"After a big block of training we are itching to get back into the World Cup scene. After an effort like that it shows the work we have done in the winter has given us the progression to step up," said Mitchell.

"It feels as good as the first one," Dawkins said of New Zealand's sixth Oceania team sprint title in a row.

"They are always a hard-fought battle against Australia they always put everything out there. It is early in the season so hard to tell how each team is going but we found out this evening we are very very close which is awesome. We always have that great rivalry and it sets up a good platform for Oceania athletes progressing through to World Cups and World Championships."

Earlier the quartet of Wyllie, Sexton, Dobbs and Waine upset the Australia combination in the final, sticking to their race plan to put the Australians under pressure.

They prevailed by just half a second in 4:07.169 after the two teams could not be separated for the entire 4000m test at the Adelaide Super-Drome.

"It was great to come away with the win and great to see the boys come together in only a week together. Sam (Dobbs) has only been back on his bike four weeks and good to have him with us and for him to get through the ride," said Waine.

Dobbs, who has been focussing on the road and just returned from a tough season in Europe, was surprised with his first effort on the boards.

"I am so stoked to do this with the boys. This was my first ever team pursuit this morning. It's great when the plan works out, and I couldn't be happier," said Dobbs.

Sexton, part of the Commonwealth Games team, said the ride was executed perfectly.

"It was well executed ride by the boys. We had the plan and stuck to it. You do the mahi and you get the treats."

The hosts won all four finals in the team pursuit and team sprint in the junior competition with the closest battle coming in the junior boys' team pursuit final with the combination of Laurence Pithie, Reuben Webster, Griffyn Spencer and Conor Shearing pipped by half a second in an exciting battle.