The Pakistani cricketers are closing in on victory in the first Test against Australia in Dubai.

Pakistan seamer Mohammad Abbas claimed three quick wickets as Australia hobbled their way to 136-3 on the forth day, chasing a mammoth target of 462. 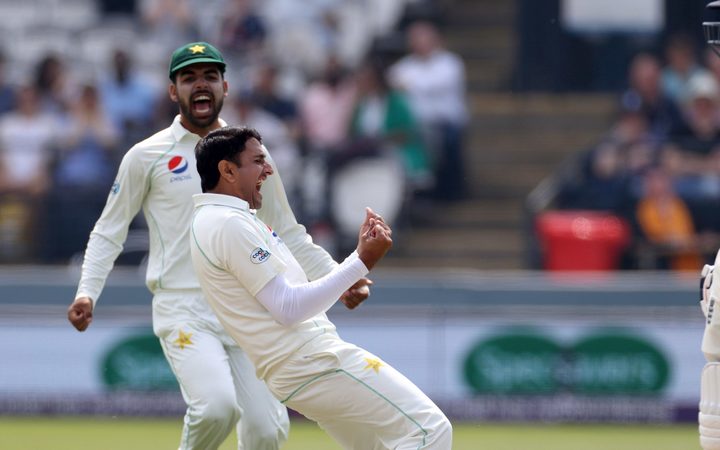 Australian openers Usman Khawaja and Aaron Finch picked up where they left off after their 142-run stand in the first innings, adding 72 runs by tea on day four.

The pair added 15 more runs in the final session before Abbas trapped Finch leg before for 49.

The visitors squandered another good start when the Marsh brothers were dismissed for ducks by Abbas.

Shaun was caught behind off a well directed delivery, while a darting inswinger downed Mitchell plumb in front of the stumps.

Khawaja (50) and Travis Head (34) added 49 runs and will look to continue on the same note as they hope to grind out an unlikely draw on the final day.

If the tourists are to pull off a victory they will have to surpass the highest chase in test cricket by West Indies, who managed 418-7 against Australia at Antigua in 2003.

Pakistan resumed at 45-3 in the morning session and batted sensibly on a deteriorating pitch before declaring their second innings at 181-6.

Imam-ul-Haq (48) and Haris Sohail (39) missed out on half-centuries but their 65-run partnership took the lead close to 400 runs.

Imam was the first to fall on the day, offering left-arm spinner Jon Holland an easy return catch.

He was soon joined in the dressing room by Sohail, who was adjudged leg before off the bowling of debutant Marnus Labuschagne after Australia sought a review of the umpire's original decision.

Asad Shafiq and Babar Azam then combined to add 71 to peg Australia back further under the sweltering Dubai heat.

Off-spinner Nathan Lyon tempted Shafiq into playing a lofty shot which was held by Mitchell Marsh at deep mid-wicket with the batsman falling on 41.

Lyon's 310th test wicket saw him join Brett Lee as the fifth leading wicket-taker for Australia in the longest format of the game.

Abu Dhabi will host the second and final test from Oct. 16.