The Nevada State Athletic Commission has seized footage and frozen the winner's $3.2 million purse after a mass brawl erupted when Khabib Nurmagomedov retained his UFC lightweight title in a bitter fight with Conor McGregor. 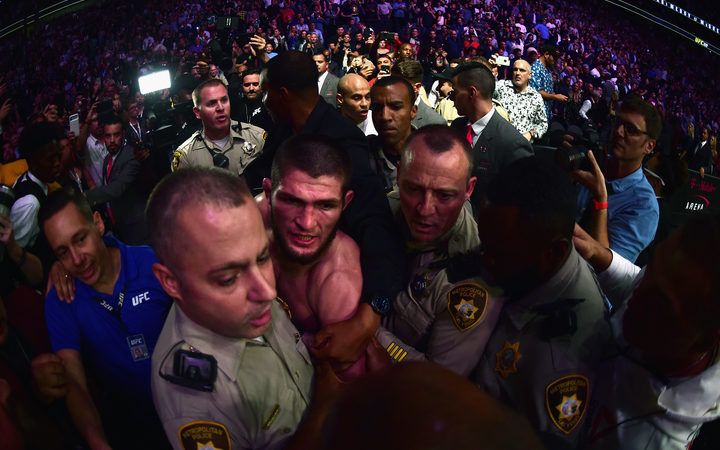 Nurmagomedov jumped out of the cage before leaping feet first at McGregor's team mate and cornerman Dillon Danis, and three of the Russian's team were arrested and later released on a black night for a sport that has struggled to win mainstream acceptance for 25 years.

"I saw one of Conor's guys yelling at Khabib, Khabib ran and jumped over the octagon, went after him. Two of Khabib's guys got into the octagon, one guy hit Conor with some shots form behind, and that's it," UFC boss Dana White told a media conference.

Mr White confirmed that the Nevada State Athletic Commission had seized footage of the bout known as UFC229, withheld Nurmagomedov's purse but released McGregor's $4.6 million purse after determining his side had done nothing wrong in the melee and launched an investigation. Three of Nurmagedov's staff were arrested but then released after Conor said he did not want to press charges.

After a lengthy delay, Nurmagomedov eventually addressed a media conference at the T-Mobile Arena.

He went on to complain bitterly about McGregor's behaviour in the lead-up to the fight that exacerbated the bad blood between the two teams.

The 30-year-old from Dagestan had mauled former two-weight champion McGregor before the Irishman tapped out to a rear naked choke hold in the fourth round, but that was quickly forgotten in the following melee.

Angry fans of the two fighters brawled in the concourses of the arena as police and security staff struggled to maintain any semblance of order, and violent scuffles continued into the night around the Las Vegas strip.

White said that it would be now up to the Nevada State Athletic Commission to decide if Nurmagomedov would face further sanctions.

"I saw one of Conor's guys yelling at Khabib, Khabib ran and jumped over the octagon, went after him. Two of Khabib's guys got into the octagon, one guy hit Conor with some shots form behind, and that's it," UFC boss Dana White told a media conference.

"There's going to be fines," he said.

"There's going to be God knows what. Can these guys get visas to get back in the country? We'll see how this plays out, but I've been doing this for 18 years, and this is the biggest night ever, and I couldn't be more disappointed."