Opinion - Just when you think you've run out of superlatives to describe the way the All Blacks and Springboks play rugby against each other, they go and do this, writes Jamie Wall. 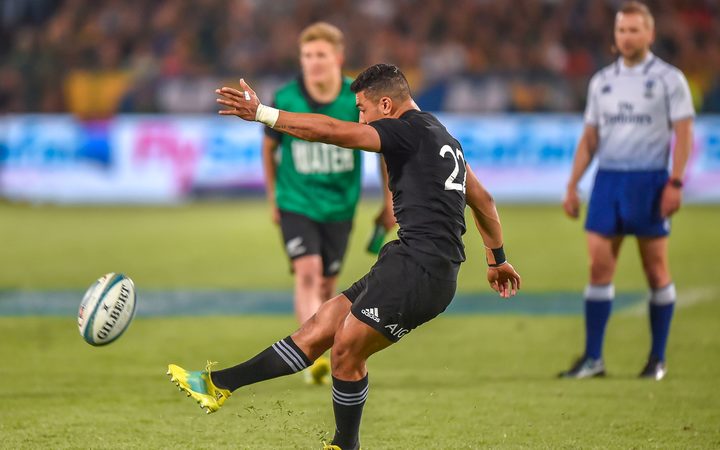 Was it a classic by the standards of the last two games the sides played against each other? Well, maybe not given the turgid first half - but the second was a thrilling contest that saw both sides play some terrific rugby.

Early on, the Springboks looked to have reverted back to the cloyingly effective brand of rugby that had brought them so much success over their history, grinding away upfield and opening the scoring with a 55 metre monster kick at goal by Handre Pollard. He followed that up with another one from in front, and even though six points was never going to be enough to win, the signs were there that something was clearly off with the All Blacks.

But while they bumbled and infringed their way to halftime, the All Blacks held their nerve enough on defence to make sure the damage wasn't more. Beauden Barrett slotted a long range shot of his own to mean the scores were level, but they had barely managed to string more than three phases together all half - in fact it took Barrett 10 minutes before he'd even really touched the ball.

The Boks then went on a rampage after halftime, shooting out to a 30-13 lead. It was at this stage that most New Zealanders would've been mentally preparing themselves to post 'well, at least it was the Springboks' again all over social media, in anticipation of what should've been the biggest hiding the All Blacks would've copped in a long, long time.

But then came the fightback.

Ironically, Richie Mo'unga's first touch was an aimless kick that had led to Damian de Allende's try. But after that the substitute first five controlled every aspect of the game, setting up Rieko Ioane's try after Cheslin Kolbe had rushed up out of the defensive line, and taking over the goal kicking.

For a player renowned for his assured and safety-first decision-making though, it was a moment of flukey brilliance that Mo'unga will be remembered for in this one.

Did he mean to bounce the last touch finder out? Probably not, but his gamble to punt the ball long in the rarified high veldt air could have been disastrous. Instead, it gave the All Blacks the crucial territory they needed to launch the ultimately successful assault on the line that led to Ardie Savea's winning try.

After an hour of playing like garbage, this was the All Blacks at their ruthless and clinical best. Just moments before, they'd had exactly the same scenario that had led to Scott Barrett bashing over - so attacking the same exact spot showed evidence of being able to formulate a way to an unlikely win on the fly, and then execute.

The temptation must have been there to fling the ball wide, like the way the game finished in Wellington, but the forwards knew they had the Boks' number by that stage. The knockout blow was a punch straight into the mouth of the South Africans, a fitting end to a trio of epic tests that started in Cape Town last year.

However, the Springboks can probably shoulder a lot of blame for their own demise. Unlike Wellington, where they held their nerve to pull off a stunning victory built on heroic defence, they fell to bits in the last 10 minutes. They weren't helped by the substitution of their best player, halfback Faf de Klerk, in that period. The move was particularly baffling considering he'd played basically every minute of every Rugby Championship game so far this season.

The Boks, more than anyone, should be aware that the All Blacks possess the firepower and resolve to turn around a 12 point deficit. But they gave away that crucial penalty, buckled under the onslaught of the All Black forwards, and found themselves staring up in disbelief as Mo'unga's winning conversion sailed through the uprights.

While they'll be distraught, it'll be a slightly different feeling up in Ireland and Scotland. Next year at the World Cup, their Group A collides directly with Group B, meaning that both of them will presumably be running into the All Blacks and Springboks in the quarter finals.

The World Cup draw does mean that the All Blacks and Springboks open their campaigns against each other beforehand, and if their recent history is anything to go by then it'll be a huge start to the entire tournament.

It also means both could eventually meet each other in the final - wouldn't that be the best way to decide who rules the rugby world?