Manchester United produced a stunning fightback to relieve some of the pressure on manager Jose Mourinho as they came from two goals down to beat Newcastle United 3-2 in the Premier League on Saturday. 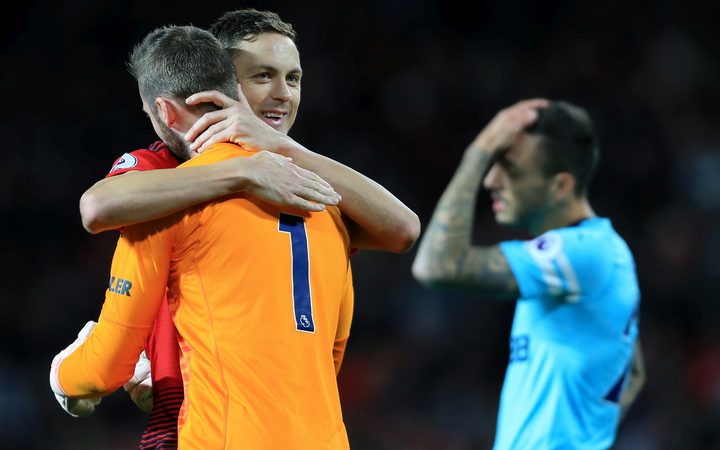 The victory lifted United to eighth place in the standings, three points behind Bournemouth who continued their fine form with a 4-0 thrashing of 10-man Watford at Vicarage Road.

It was Old Trafford, though, which drew the main focus of the day after media reports had suggested that Mourinho was close to losing his job following disappointing results in all competitions.

The Portuguese's exit looked inevitable after Brazilian winger Kenedy gave Newcastle the lead with a smart finish before Yoshinori Muto made it 2-0 after 10 minutes following poor United defending at a corner.

The hosts turned it around in the second half, though, Juan Mata sparking the comeback with a low, curling free kick in the 70th minute. Anthony Martial equalised six minutes later before substitute Alexis Sanchez headed in the dramatic winner in the last minute of normal time.

While Old Trafford was celebrating wildly and singing Mourinho's name, the pressure switched to Newcastle manager Rafa Benitez as his side remained winless in the league and second-bottom of the table.

Elsewhere, there was a rash of red cards but nowhere was one more significant than at Vicarage Road where 10-man Watford were humbled by Bournemouth.

David Brooks had given the Cherries the lead after a quarter of an hour before Watford's Christian Kabasele received a second yellow for bringing down Josh King in the penalty area.

King converted the resulting spot-kick and added another goal on the stroke of halftime as Bournemouth began to run riot.

Callum Wilson grabbed the fourth two minutes after the break as Eddie Howe's men continued their impressive start to the season, moving up to fifth. Watford, now winless in four league games, are ninth.

That did not stop the winless team from giving a good example of themselves, creating good chances against a wasteful Spurs side.

However, Tottenham never looked in serious trouble and came through 1-0 winners thanks to Eric Dier's early goal.

Leicester City were trying to mount a comeback from going a goal down to Everton when Wes Morgan was sent off for a second booking just after the hour mark.

Ricardo Pereira's drilled effort following a brisk counter-attack had cancelled out Richarlison's early strike for the visitors at the King Power Stadium.

But with a numerical advantage, Everton's Gylfi Sigurdsson made sure of all three points 13 minutes from time with a superb right-foot shot from just outside the area.

Huddersfield Town scored only their fourth goal of the season in a 1-1 draw at Burnley.

Sam Vokes headed in to give the home side the lead after 20 minutes. But a second-half header from Christopher Schindler levelled the match and lifted Huddersfield off the bottom of the standings.

Wolverhampton Wanderers claimed a Premier League record by naming an unchanged first 11 for their opening eight games of the season - and it paid dividends as they won 1-0 at Crystal Palace.

Matt Doherty found the bottom right corner from a tight angle shortly before the hour mark as Palace's struggles in front of goal continued.