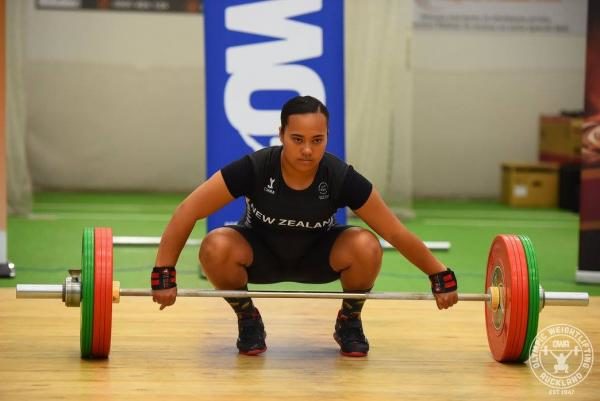 The Avondale College student was named flagbearer by Chef de Mission Barbara Kendall at a team function attended by around 100 athletes and support staff.

Kendall says Andrews-Nahu was chosen because her actions epitomise the values and culture of the New Zealand Team.

"Kanah is not only an exceptional athlete but a leader and role model at her school, in her community and in her sport," said Kendall.

"She shows maturity and commitment beyond her years and impresses on a daily basis. She's also an inspiration to many young Maori and Pacifica athletes.

"It's my absolute pleasure to present Kanah with the New Zealand flag and name her as the flagbearer. She's the perfect person to lead the New Zealand team into the Opening Ceremony."

Andrews-Nahu began weightlifting at age 13 when she transitioned to the sport from crossfit.

The Aucklander, who is of Ngāpuhi, Ngāti Porou, Samoan and Fijian descent, says she's honoured to be named flagbearer.

"I feel very privileged, I feel like a I have fireworks going off in my body, I'm so excited," she said.

"This is such a great team of awesome athletes so I'm extremely proud to be chosen as flagbearer. My heart is going to feel extremely full as we march in the Opening Ceremony and I'm really looking forward to representing New Zealand at these Games."

The U75kg lifter is coached by Olympian Richie Patterson and will lead the New Zealand Team into the Opening Ceremony which begins at 2000 this evening local time (1200 New Zealand time).

The New Zealand team is made up of 61 athletes who will compete across 22 sports from October 6th to 18th.

An estimated 500,000 people will attend the Opening Ceremony which is being held in central Buenos Aires. The Ceremony will feature a celebration of Argentina's unique Latin-American culture.