The Australian womens cricketers have completed a sweep of New Zealand in the T20 series after winning game three in Canberra by nine wickets. 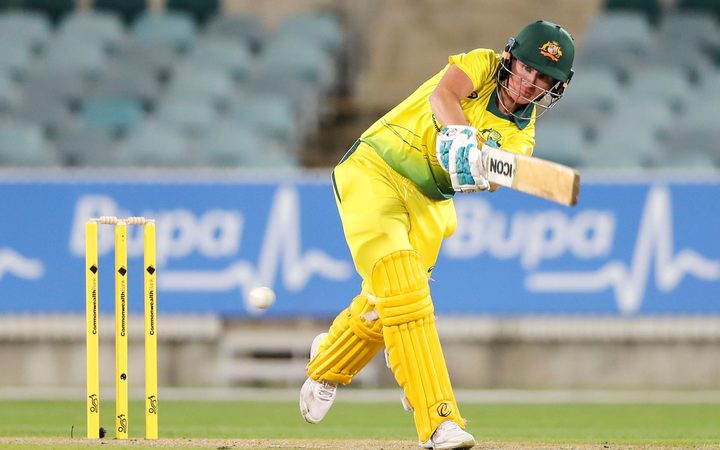 The White Ferns were again asked to bat first and were bowled out for just 103 with an over to spare.

The New Zealanders lost regular wickets with Katey Martin top scoring with an unbeaten 35, while captain Amy satterthwaite was next best with 14.

Wicketkeeper Alyssa Healy and fellow opener Beth Mooney made light work of the modest target, which was reached after just 12.3 overs.

Healy laid into an ineffective attack, smashing 67 off 44 balls before lofting a catch to deep midwicket with six runs required.

Coming off 57 in the second game, Healy belted 12 fours and a six, while Mooney finished unbeaten on 29.

Healy was named player of the series.

Fast bowler and player of the match Perry was always at the batters, taking 4-21, including the key scalps of Suzie Bates and Amy Satterthwaite.

"I think playing under lights is always reasonably nice as a quick because the ball just tends to skid on a little bit more, particularly when it's bit cooler," Perry said.

Spinner Molineux showed great control to earn lbw decisions against Bernadine Bezuidenhout and Kate Ebrahim in successive deliveries and although denied a hattrick she could celebrate her best T20 international figures of 3-11.

New Zealand had won seven of their last nine T20 games against Australia going into the series.

'Throughout our preparations over the winter certainly something we really earmarked was starting the season off well and playing some really good cricket,"' Perry said.

"Turning around a bit of momentum recently in T20 cricket against New Zealand, it's been brilliant."

New Zealand contributed to their downfall with some loose shots as Australia's bowlers extracted some swing in chilly conditions.

The only White Ferns batter to fire was Katey Martin whose defiant unbeaten 35 off 34 balls, included three of the innings' seven fours.

Australia will play three matches against Pakistan in Malaysia later this month before heading to the West Indies for the World T20 tournament in November.

The White Ferns return home to prepare for the World Cup.