Teenage batting prospect Prithvi Shaw struck a breezy century on debut to put hosts India on course for a big first-innings total in the opening test against West Indies at Rajkot.

At 18 years and 329 days, Shaw became the youngest Indian and fourth-youngest overall to score a ton on his test debut during a knock of 134 off 154 balls. 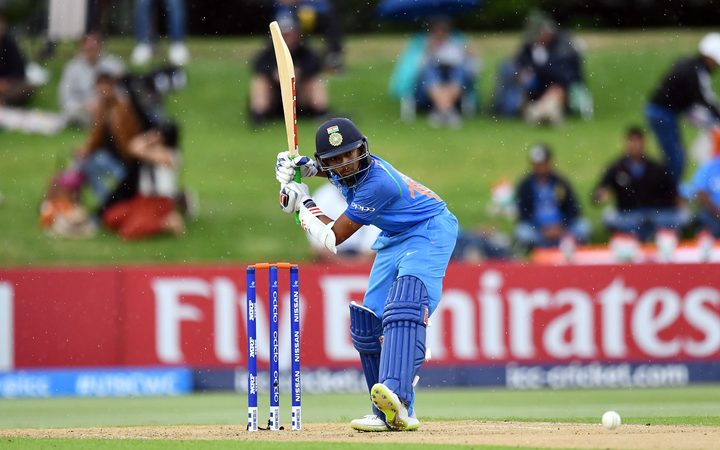 Prithvi Shaw at the ICC under-19 World Cup. Photo: PHOTOSPORT

After captain Virat Kohli had won the toss and opted to bat, India made the most of a docile pitch and a toothless West Indies attack to reach 364 for four at the close.

Shaw added 206 for the second wicket with Cheteshwar Pujara, who made 86, before both batsmen fell in the second session.

At stumps Kohli was unbeaten on 72 with wicketkeeper-batsman Rishabh Pant not out on 17 and India already in the driving seat in the match.

With the hosts opting for three frontline spinners, West Indies' stand-in captain Kraigg Brathwaite will be aware that his side face a stiff task of having to bat last on a pitch already offering some turn for the slow bowlers.

West Indies, already without Kemar Roach after the pace spearhead returned home due to a family bereavement, suffered a further setback when captain Jason Holder was ruled out with an ankle injury.

Shannon Gabriel provided some early cheer for the tourists, however, when he sent back Lokesh Rahul leg before without scoring in the first over of the day, but that proved to be the sole success for the Caribbean side in the first session.

The depleted West Indies attack did not have enough teeth to trouble Shaw and Pujara as they plundered runs at will after Rahul's departure.

Shaw scored his first runs with a punch off the back foot through the covers off his second delivery, making it evident why he has already been tipped for a bright future in national colours.

Often a tad flashy with his shot selection, Shaw was fluent on both sides of the wicket and hit 19 boundaries in his maiden test knock.

He drove paceman Keemo Paul on the up through covers to reach triple figures off 99 balls, becoming the fourth youngest to score a hundred on debut.

Shaw's innings came to a tame end when he offered a simple return catch to leg-spinner Devendra Bishoo in the last over before the tea break.

Pujara, playing on his home ground, was typically solid at the other end, waiting patiently for loose deliveries to pick up boundaries. He edged behind to become debutant fast bowler Sherman Lewis's maiden test wicket.

Kohli and his deputy Ajinkya Rahane (41) added 105 for the fourth wicket to continue India's progress before the latter was caught behind to off-spinner Roston Chase.

The second test of the two-match series is in Hyderabad from Oct. 12-16.