The Breakers assistant coach Judd Flavell says all his players stood tall as they pushed NBA team the Phoenix Suns in their pre-season game in Arizona.

The Suns beat the Breakers 91-86 in their game of a series of matches between NBA and NBL teams. 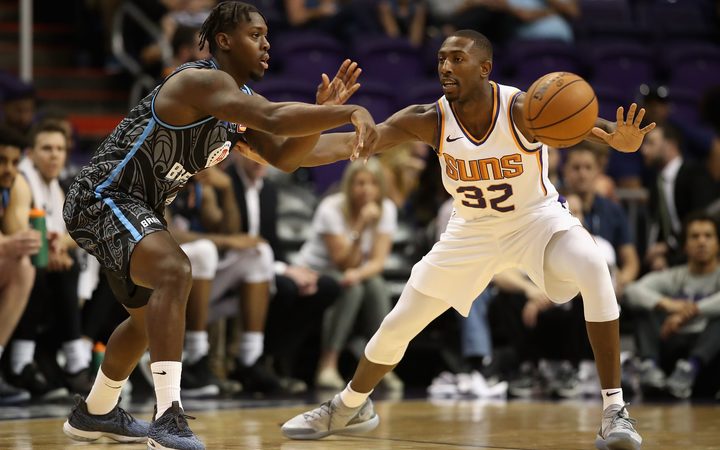 Armani Moore of the New Zealand Breakers passes the ball around Davon Reed of the Phoenix Suns during the first half of their game. Photo: AFP

"I think anytime someone has a performance like that where they score the ball and make shots over the top of NBA defenders who don't slouch at that end of the floor, they're great athletes who have great lenght, Webster had one of those nights where he could get his shot off whenever he wanted.

Flavell says they were there to win the game and the result shows that the NBL isn't that far behind the NBA.

"They're human beings as well, they feel pressure when the games not going their way and being able to expose a few of their weaknesses."

"If one or two of those shots had fallen down the crunch, this game, this result could have been a different story."

"I think for the NBL in general this is showing that the gap is closing.

The Suns were considered the most vulnerable target of the visiting NBL squads seeking a win against a team from the world's best basketball league.

The Suns had the NBA's worst record last season and against the Breakers were without injured star guard Devin Booker who recently signed a $US158 million ($NZ243m) contract extension.

The Breakers scored the first basket of the game to take a 2-0 lead, but the Suns quickly took control and did just enough to maintain a buffer throughout.

In the final minute the Breakers, led by Auckland-born guard Corey Webster, cut the lead to four points.

The Suns' best was 216cm tall centre, their number one draft pick Deandre Ayton who had 21 points and 15 rebounds and former Houston Rockets forward Trevor Ariza with 16 points and six assists.

The NBL-NBA series concludes on Saturday with Melbourne United up against the Toronto Raptors, Perth Wildcats play the Denver Nuggets and the Adelaide 36ers face the Utah Jazz.

The past week the Los Angeles Clippers beat the Sydney Kings 110-91, the Jazz crushed the Wildcats 130-72 and Ben Simmons' Philadelphia 76ers cruised to a 104-84 win over Melbourne United.