The New Zealand Women's Golf Open will again not be played next year, but tournament organisers are optimistic about a return to the LPGA Tour schedule in 2020. 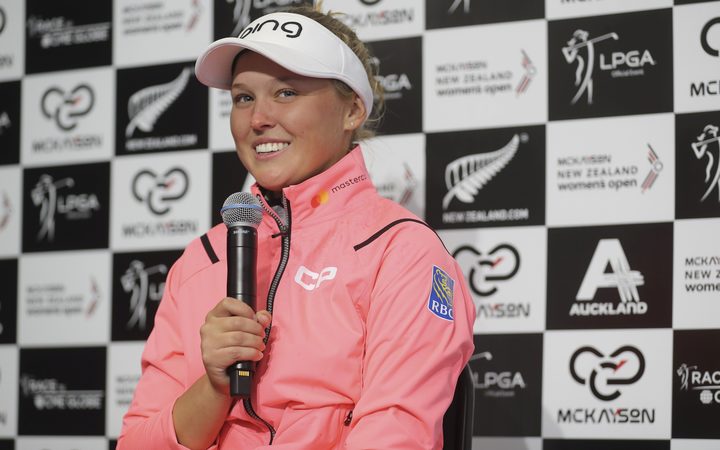 After this year's event had to be cancelled, New Zealand Golf confirmed on Tuesday the loss of sports apparel and accessory brand McKayson as title sponsor meant the 2019 tournament had suffered the same fate.

The event was part of the LPGA Tour for the first time in 2017, with New Zealand star Lydia Ko acting as tournament host and Canadian star Brooke Henderson claiming title honours.

Although the latest news meant the event would be absent a second straight year, managing director of tournament promoter The Clubhouse, Michael Goldstein, was upbeat it would feature on the Tour for the 2020 season.

"The situation with McKayson is unfortunate and the bottom line is that without a global naming sponsor the event is not commercially viable.

"We are heartened by the strong ongoing support for the event amongst our local partners and are looking forward to working with New Zealand Golf and the LPGA Tour for the 2020 event."

Shortly after the 2017 event, which was held in September, LPGA Tour commissioner Mike Whan told the Golf Channel they had cancelled the 2018 tournament to enable to a move to an earlier part of the year in 2019.

Whan said they preferred holding the tournament earlier in the year as it would allow it to dovetail the Australian Women's Open.

However it is understood the local and central government funding the event received was subject to it being held in September-October.

Goldstein said the 2017 event attracted over 20,000 bed nights to Auckland, delivered a direct economic impact of more than $2.5m and "showcased New Zealand to more than 150 countries around the world".

Backing up Goldstein's optimism around 2020, the LPGA expressed their desire to return.

Senior vice president of tournament business affairs and LPGA properties, Ricki Lasky, said New Zealand had proved a popular country for their players to visit for the inaugural event in 2017.

"Having an event back in New Zealand would also provide a perfect opportunity for the LPGA to showcase the depth of talent on the tour as well as the beauty of New Zealand via the global television coverage."