Five debutants have been named in the Kiwis squad for the end of year tests against Australia and England.

The other newcomers are Melbourne Storm hooker Brandon Smith and utility back Jahrome Hughes, who was in the Storm's extended squad for the grand final, as well as Penrith player Corey Harawira-Naera and Warriors second rower Isaiah Papali'i.

Jesse Bromwich and Kevin Proctor are back in the Kiwis squad, having missed last year's World Cup after being accused of trying to buy cocaine outside a Canberra nightclub following the Kiwis loss to Australia in May last year. 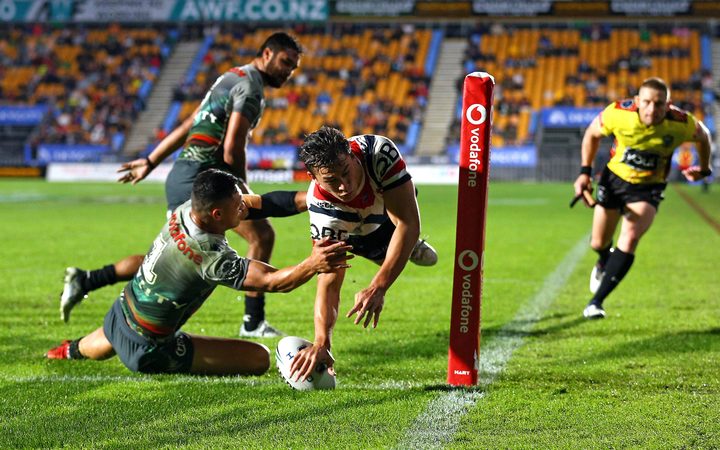 Joseph Manu scores for the Sydney Roosters against the Warriors. Photo: Photosport

The Warriors trio of Adam Blair, Shaun Johnson and Gerard Beale return having having missed the one-off Test against England in Denver June.

Also back in the squad after missing the Denver match is Melbourne's Kenny Bromwich and Canberra Raiders player Jordan Rapana.

"This is a new era for the Kiwis and that's again reflected in the make-up of this squad as it was for the Denver Test," said coach Michael Maguire.

"A lot of experienced players have moved on in recent years in the shape of Simon Mannering, Thomas Leuluai, Manu Vatuvei, Jason Nightingale, Ben Matulino, Kieran Foran, Russell Packer and others.

"We're also without Roger Tuivasa-Sheck, Issac Luke, Tohu Harris and Nelson Asofa-Solomona this time while there have been a number of players who have aligned themselves with Tonga.

"For us it's really exciting bringing in these new players as we strive to take the national side to the place we want it to be. That starts with the Test against the Kangaroos."

Melbourne prop Nelson Asofa-Solomona and Sydney Roosters front rower Zane Tetevano were both ruled out of contention for the tour this morning following injuries they picked up in the grand final.

The Kiwis will assemble in Auckland this weekend with the first test against the Kangaroos at Mount Smart Stadium on Saturday, 13 October, followed by a three-Test series against England with games in Hull, Liverpool and Leeds.

It's the Kiwis' first Test against the Kangaroos on New Zealand soil since winning the 2014 Four Nations final in Wellington and the first time since 2012 that the countries have met in Auckland.

The last time New Zealand and Australia met at Mount Smart Stadium was in the 2006 Tri Nations.