New Zealand international Kimiora Nati has scored a hat-trick to help her Brisbane Broncos team to a 34-12 win over the Sydney Roosters in the inaugural NRL women's premiership rugby league final in Sydney. 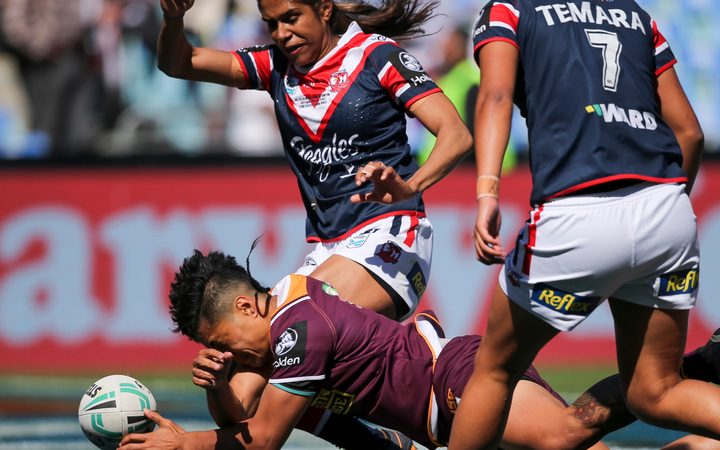 The Broncos set a benchmark in the maiden NRLW season that will be hard to match, finishing unbeaten for 2018 with a remarkable 110-30 points differential after four straight victories.

Brisbane five-eighth Nati was the standout in front of 16,214 fans on Sunday afternoon, crossing three times thanks to the NRLW's first penalty try.

Nati helped herself to a first-half double as the Broncos cruised to a 28-6 lead by the main break.

She scored a solo try in the sixth minute before nabbing her double 12 minutes later with some assistance from the video referee.

Nati, 30, was awarded the 18th-minute try after Roosters winger Taleena Simon kicked the ball out of her hands as the playmaker crashed over off an Ali Brigginshaw grubber.

There was no let-up in the second half as Nati somehow defied three defenders to get the ball down in the 46th minute to clinch her hat-trick and seal the result 34-12.

The Broncos saved their best until last on Sunday, posting their biggest total of the short season and eclipsing their 32-10 effort last round against the Warriors.

Remarkably, no other team managed to score 30 points in a match this year.

In contrast, the Roosters only scraped into the grand final on points differential with one win - a 26-0 blitz of St George Illawarra last week.

The difference in class emerged as Brisbane piled on five tries by the main break, at one stage scoring a point a minute in the 30-minute half.