Europe will take a healthy advantage into the final day of the Ryder Cup after emerging from day two with a 10-6 lead over the United States. 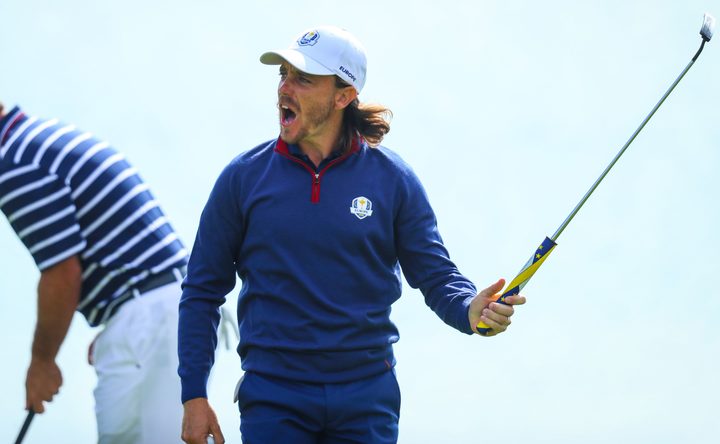 Inspired duo Tommy Fleetwood and Francesco Molinari led the charge with two victories over a struggling Tiger Woods to take their tally so far at Le Golf National to four points.

Thomas Bjorn's European side, bidding to retain the trophy they lost at Hazeltine two years ago, dominated a misfiring American side in the morning fourballs, taking the series 3-1.

The US offered more resistance in the foursomes, winning two matches, but they could not eat into the deficit.

Jim Furyk's side need eight points from the 12 singles matches on the third and final days play to retain the trophy.

Fleetwood is the first European rookie to win four points in a row while he and Molinari, dubbed "Molliwood" after a sensational weekend are only the second pair to win four points from their opening four matches in Ryder Cup history.

Having crushed Woods and Patrick Reed in the fourballs they then gelled superbly to beat a deflated Woods and American rookie Bryson Dechambeau by an even more emphatic 5&4.

Woods, who dragged himself through two matches on Saturday, showed occasional bursts of brilliance but he has now lost 19 of his 29 matches in fourballs and foursomes and seven in a row.

Justin Rose, rested for the morning fourballs, returned to partner Henrik Stenson in the foursomes to a 2&1 defeat of Dustin Johnson and Brooks Koepka - ranked one and three in the world.

Europe did not have it al their own way though on a pleasant, breezy day south west of Paris.

Three-times major winner Jordan Spieth and Justin Thomas set the benchmark for the Americans with two points on Saturday.

They earned a gritty 2&1 win over Spain's Jon Rahm and Ian Poulter in the fourballs and returned later to beat Poulter and Rory McIlroy 4&3 in the foursomes having lost the opening two holes.

Only twice in Ryder Cup history has a team come back from a four-point deficit going into the singles, although as holders Furyk's side need only draw to retain the trophy.

After being second-best for two days, however, a Sunday counter-attack looks as though it will be beyond them.