The White Ferns have relinqueshed the upper hand to lose the first T20 to Australia. 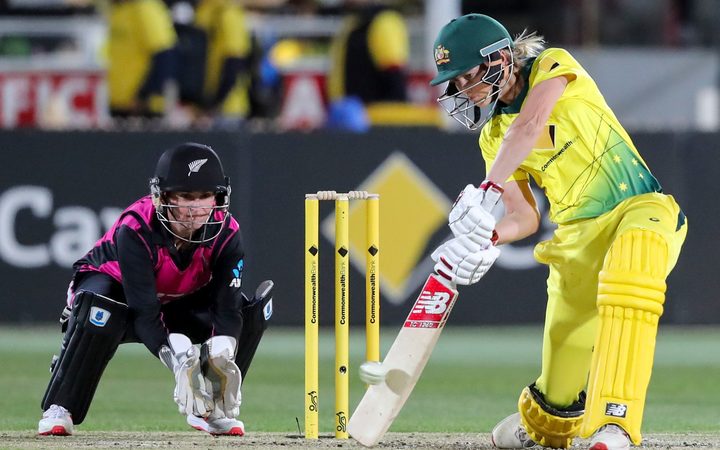 Chasing 163, Australia were struggling at 4-45 in the fifth over but recovered to win by six wickets with 14 balls to spare.

A perfectly paced unbroken fifth-wicket stand of 119 wrenched the match out of the White Ferns' grasp.

Lanning, in her first international in Australia since February 2017, scored 56 off 44 balls.

Her deputy Haynes, who led Australia last summer when Lanning missed the entire Ashes series with a shoulder injury, was dropped on 56 and 58, but otherwise batted fluently in her innings of 69.

The result gave Australia their sixth win from as many T20 internationals on the ground in front of a crowd of just over 3000.

"'Meg's a pretty good player to bat with," Haynes said.

"We lost a few early wickets, there was some good bowling out there as well, but it was nice to have a partnership and get us over the line."

A late innings flourish which produced 36 from the last two overs set Australia a testing target.

Sent in by Lanning, the White Ferns made 162-5 with Katey Martin top scoring with an unbeaten 56 off 33 balls and Sophie Devine notching 43 from the same amount of deliveries.

Devine's dismissal was contentious, with the catch by Beth Mooney at point looking as if it might have been taken on the half volley.

It was confirmed as out after numerous looks by the off-field official, although Devine felt she was not out.

"I was disappointed with the decision, I think from our point of view, we felt that it was not out and maybe it had an impact on the game," White Ferns coach Haidee Tiffen said.

However, Haynes was adamant it was a fair catch.

"I was two metres from it, and there's no doubt in my mind that it carried," ' Haynes said.

Spinner Ashleigh Gardner was Australia's only multiple wicket-taker with 2-22 of three overs.

Debutante Georgia Wareham went for 15 in her one over of leg spin, but had Jess Watkin smartly stumped by Alyssa Healy off a legside wide.

The Australian openers took 13 off the first over, but Devine earned lbw decisions against Alyssa Healy and Elyse Villani.and Leigh Kasperek had Mooney and Ashleigh Gardner caught in the deep.

The series continues in Brisbane on Monday and Canberra hosts the finale four days later.