The New Zealand cyclist Patrick Bevin has finished eighth in the men's individual time trial at the World Road Cycling Championships in Austria.

Bevin finished two and a half minutes behind the winner Australian Rohan Dennis.

Dennis produced a stunning ride to claim the title ahead of Dutchman Tom Dumoulin. 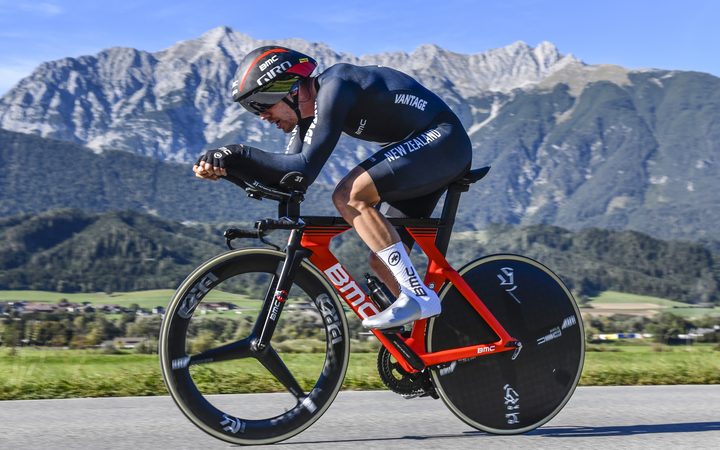 Patrick Bevin on his way to a top ten finish in the individual time trial at the world champs in Austria. Photo: Robert Jones

Dennis completed the 52.1km course, which included a testing 5km climb, in one hour three minutes and 2.57 seconds - more than a minute faster than his rival.

Defending champion Dumoulin finished one minute and 21.09 seconds back, having found the climb tough going, to claim silver just ahead of Belgium's Victor Campenaerts.

It marked the end of long wait for the 28-year-old Australian's first rainbow jersey.

Dennis said "It's a dream come true being world champion.

"I have been chasing this since I was a junior. I have never won it in any age group so to win my first one in the seniors is really special. I am just going to enjoy the moment, then try again next year."

Dennis is Australia's second elite men's time trial world champion after Michael Rogers, who won the event three times in a row between 2003 and 2005.

The other New Zealander in the field, Hamish Bond was 25th.

Bevin, who has enjoyed an outstanding season for his BMC professional team, was competing in his first first world championship time trial, and is a BMC Racing teamate of Dennis.

It has been a breakthrough season for Bevin in his first year on the World Tour where he has been given the full team support to ride the time trial.

"I have got to be pleased with that performance. I had a plan and while it was not perfect and I had to adjust along the way, it was pretty pleasing on what was a very challenging course," said Bevin.

"Right now I am the most sore I have been. The time trial courses for the worlds are changing to like this one, with big climbs and over 50kms which is longer. It was particularly tough this year and is trending towards longer, tougher courses that find the overall best rider.

"I learned a bit about myself out there as it was unchartered territory but it was nice that I could stick to it."

Bevin, 27, said he was pleased with his climbing efforts although the descent on the more rigid time trial machine provided some challenging moments.

"These bikes are not designed for their handling capabilities when you are hurtling around 100kph so you had to be on your best as we went through some small villages on the way."

Bevin, with one more World Tour race to come after the road race at the weekend, said it has been a breakthrough year with his points category win in the Tour of Britain, the team time trial stage win in the Tour de France and his consistency with time trial podiums at the Tour of California and Basque

He is now turning his attention to the road race where he competes alongside George Bennett, Dion Smith and Sam Bewley.

"I am looking forward to it. I am climbing well and with George our best climber, we have possibly the strongest New Zealand team for a while. Obviously we can't dictate things with four riders and will need to be on our toes in what will be an interesting and very hard day." 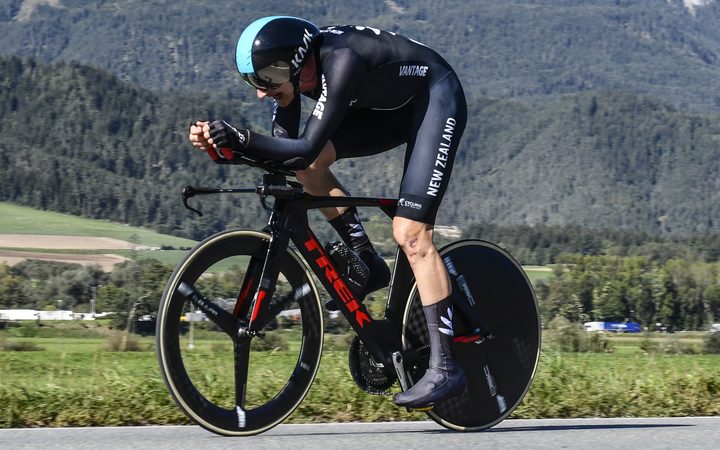 Bond showed improvement on his 39th placnig last year to 25th this time as he makes the adjustment from world champion rower to cycling, at a time when the courses for time trials become significantly more challenging, racing at altitude, with climbs, longer distances and testing bike handling.

Bond in the top half of the field but nearly five mintues behind the winner.

Attention now turns to the road with the Nelson pair of Niamh Fisher-Black and Britney Kerr competing in the junior women's race over 72.4km while Theo Gilbertson, Josh Lane, Sam Cook contest the junior men's race over 138.4kms.