Billy Slater has powered Melbourne into a fairytale third straight NRL grand final with a 22-6 flogging of Cronulla, but the retiring superstar has an anxious wait to see if he'll be suspended from his farewell game for a shoulder charge. 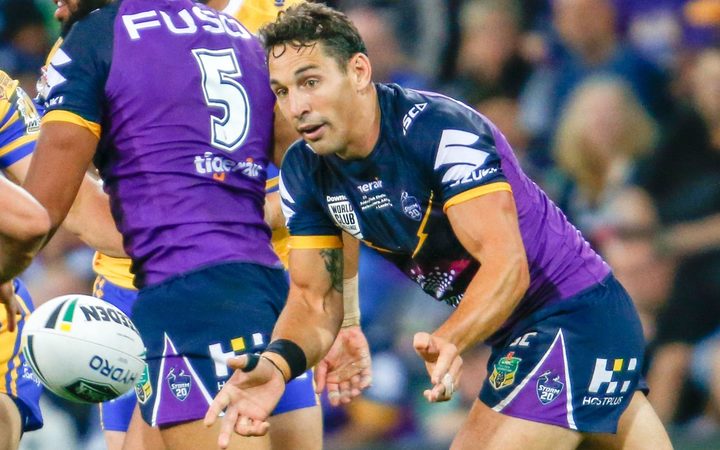 The fullback put on a first-half clinic in Melbourne, scoring two tries and setting up another to power the Storm to an unassailable 20-0 lead at the break before Cameron Smith kicked their lone penalty goal in the second stanza.

But it will be one of Slater's two try-saving plays that will garner all the attention, after the veteran fullback was penalised for a last-ditch shoulder charge that stopped Sharks winger Sosaia Feki from crossing in the 14th minute.

Slater will learn today whether he is charged for the act, with even a grade-one offence earning him 200 demerit points and his final game on the sideline unless he can beat it at the judiciary on Tuesday night.

"I was just running across at speed and I thought Feki was going to step back on the inside," Slater said on Channel Nine.

"It was one of those things when both players were running at speed to get to a position and it would have been an awkward place to put my head if I had to duck it down.

"There was no malice or anything in that I didn't think."

The hit overshadowed a dominant showing by the Storm, who remain a chance of becoming the first team to go back-to-back in a unified competition since Brisbane in 1992-93.

They'll now play in their eighth grand final since 2006 - including in their salary-cap breached years - next Sunday against the winner of Saturday night's preliminary final between the Sydney Roosters and South Sydney.

Friday's win came on a golden night for Melbourne's old guard, with Cameron Smith passing 1100 career goals and reaching his highest season tally of points with 199.

In front of 26,621 fans, Slater was involved from the lead up of the Storm's opening try after he hit a gap at speed from a Felise Kafusi ball and put Brodie Croft over in the 20th minute.

That opened the floodgates, with Slater slicing through Matt Moylan on the Sharks' left-edge 10 minutes later, before he had his second moments before the break when he dived onto a Smith grubber out of dummy-half.

The try came as a number of Sharks' forwards were distracted by a scuffle involving Andrew Fifita in back play, opening the gap for Slater to chase through.

It was a play that summed up Cronulla's opening 40 minutes, the Sharks lacking composure without injured co-captains Wade Graham and Paul Gallen.

They had 52 per cent of the ball and had more play-the-balls in Melbourne's red- zone than the Storm did at their end, but had to wait until the 68th minute for retiring veteran Luke Lewis to score their only try.