The All Blacks captain Kieran Read will skip the side's trip to Argentina.

The All Blacks coach Steve Hansen said leaving Read at home for the Buenos Aires test was always part of their plan as he only returned to super rugby with the Crusaders in June following surgery on his spine in December.

"(The) original plan was to always make sure we didn't have him sitting on a plane too long and when you go to Argentina and then to South Africa, with a short turnaround and not a great ride from Argentina to South Africa, the smart plan is to is leave him at home and then send him to Africa," he said.

Read, who also missed the three Tests against France in June, will return against the Springboks in Pretoria on October 6th.

New Zealand need to win either the test against the Pumas or South Africa to secure the series.

Lock Sam Whitelock is the likely skipper against the Pumas while versatile forward Vaea Fifita has joined the squad for the Argentina leg.

"We've given the him the task of playing some Mitre 10 cup provincial rugby and he's done that but with Reado not coming we need a replacement and he's the obvious one.

Four other first-choice forwards weren't on the plane leaving from Auckland on Friday.

Liam Squire, Brodie Retallick, Joe Moody and Dane Coles are possibilities to play in the All Blacks' Test against Australia in Yokohama on October 27th.

Midfielder Sonny Bill Williams, who hasn't played for three months, was on the flight and will be considered next week.

It means there is no room for inside centre Ngani Laumape, who was called into the squad as injury cover for Williams. 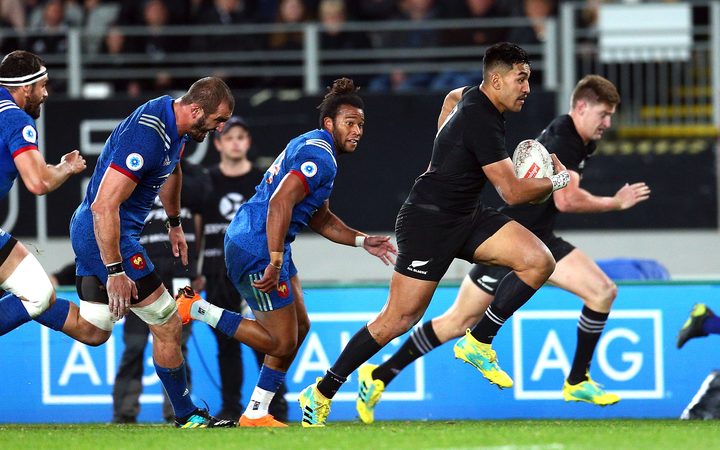 Reiko Ioane leaves the French in his wake during the All Blacks win at Eden Park in June. Photo: Photosport

Reiko has signed a four year deal through to the end of 2022, while his older brother Akira has signed on until 2021.

In the wake of recent comments by former All Black Lima Sopoag'a who suggested the lure of the All Black jersey was no longer enough and that more and more players would look to sign more lucrative overseas contracts, Hansen said the decisions by Reiko and Ioane showed the "The jersey is still important ...and that's a wonderful thing."

While Reiko Ioane's contract doesn't take him through to the 2023 World Cup Hansen was confident he would still be around for the tournament in France.