New Zealand has qualified an eventing team for the Tokyo Olympic Games despite finishing a disappointing seventh at the World World Equestrian Games in North Carolina.

Tim Price and Cekatinka were the best of the New Zealand contingent finishing eighth in the individual rankings.

His wife Jonelle and Classic Moet finished 19th with the the final team-member Sir Mark Todd finishing well back in 73rd spot.

There was less than a rail between New Zealand qualifying for Tokyo or not, as they finished just ahead of the United States to secure the berth.

Price's rail mid-course cost on the showjumping phase cost him a silver medal.

"I am a little bit frustrated," he said.

"She is a great jumper and jumped her socks off everywhere else. She has had very few rails in her career. It is a pretty demanding track out there."

He questioned whether that had been done to make up for the eventers having a forced rest day when they would normally have had the showjumping, but Hurricane Florence put a stop to that.

"It has been a bit of a roller coaster for us (the New Zealand team). It was a bit disappointing the way it unfolded for the Kiwis but it is great news we have qualified. I am actually really happy with my mare I am very excited for her future. It (the rail) didn't cost me the gold medal, so that's ok."

While the Olympic qualification wasn't the objective for the Kiwis at WEG, she said it would take the pressure off for the next 12 months.

She still disagreed with the decision to postpone competition yesterday.

"There was nothing spectacular about it (the weather) but that was the decision they made and we just had to get on with it." 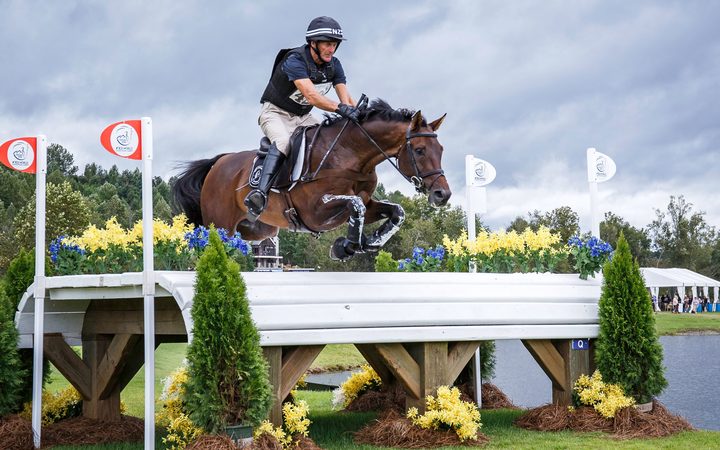 Sir Mark Todd said his young horse would take a lot away from the week.

"His eyes were out on stalks in that arena," he said.

"He is a fabulous jumper and was a little bit overawed. I have never had to ride him quite so hard."

"I came here with a relatively inexperienced but talented horse and it hasn't quite gone the way we had hoped . . . and nor for the team, but you just have to pick yourself up, learn from it and go forward."