England is to reintroduce contracts for its national women's 15-a-side players to make them fully professional.

Twenty-eight full-time deals will be available from January 1st, along with seven elite player squad agreements.

Contracts were previously awarded based on the next major tournament.

"We are at a tipping point for women's rugby globally and it is our ambition to be world number one and drive growth," Rugby Football Union boss Steve Brown said. 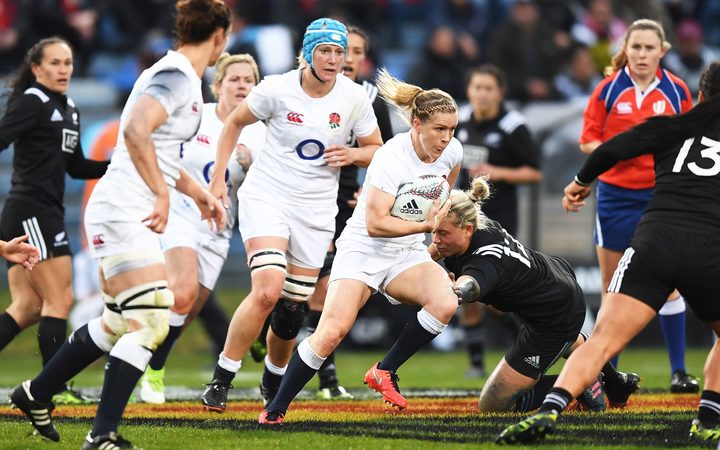 England playing the Black Ferns at Twickenham in 2017 Photo: Photosport

"We are very much behind this and want to see the continued expansion and growth to realise the ambitious targets we have set ourselves."

Brown told BBC Sport in July that it was their "ambition" to award full-time contracts in both formats of the game this season.

Contracts for England women's XVs squad were controversially not renewed after the 2017 World Cup as the RFU focused on sevens rugby.

In August, the RFU awarded 17 full-time England women's sevens contracts for the 2018-19 season.

All England players will be eligible to play for their clubs in the Tyrrells Premier 15's - the top-flight women's competition in England - and will return to the RFU for international duty.

'We want to lead the way for driving standards'

World Cup winner Giselle Mather told BBC Sport in August that contracting the internationals is the only way for England to keep pace with the other leading nations.

Full-time contracts in the women's game were previously awarded based on the next major tournament - in 2017 that was the 15-a-side World Cup, followed by the Sevens World Cup in San Francisco in 2018.

In May New Zealand rugby announced professional contracts for its women's 15's players.

With match fees and other promotional payments, they can earn up to $45,000.