Basketball New Zealand says time constraints are the reason the Tall Blacks will only sing the te reo Māori version of the national anthem prior to their game against Lebanon in Rotorua tonight. 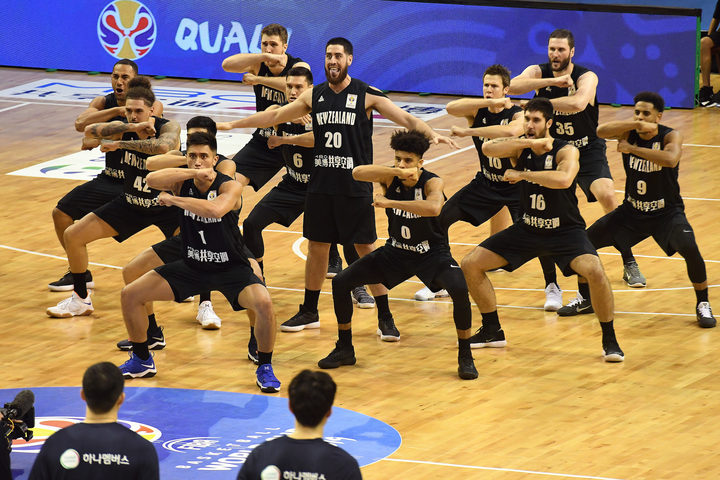 Tall Blacks perform the haka before the start of play. Photo: Photosport NZ

The rules of FIBA, the sport's international governing body, allow just one minute for each team's pre-game ritual.

Most teams meet that requirement with their anthem, but New Zealand is granted an additional minute to perform their haka, Tu Kaha O Pango Te Kahikatea.

The additional time, though, is not enough for the Tall Blacks to complete both versions of the anthem and their haka, with proceedings running into the three minute countdown to tip-off.

Basketball New Zealand chief executive Iain Potter said the organisation had been required by FIBA to reduce the team's pre-game ritual to within the allocated two minutes.

"We understand where FIBA are coming from and the fact that we have one more minute than any other team in the world is a privilege, not a right.

"It's important that we respect that rule and the opposition too.

"The last three minutes before tip-off are for the teams to complete their warm-ups. We agree that, although the opposition have been respectful of the haka, we should not be cutting into their warm-up time."

Potter said not performing the haka was not an option for the team, adding they were "likely" to alternate between the English and Māori versions of the anthem at FIBA matches, and sing both versions when the rules allow.

"We feel this is the only way to honour both versions of our anthem, and our haka.

"It's not ideal leaving one version silent as, of course, Kiwis are patriotic about both. Yet our haka and our team are also about respect for the opposition, we believe this way is our best solution to honour both our nation and the one we are facing.

Potter said it felt right to use the te reo Māori version first, but last week's celebration of Māori language played a part too.

The Tall Blacks game against Lebanon, which is set to start at 7pm, is part of the second round of Asia qualifying for next year's World Cup in China.

New Zealand led their group, with the same six-win and one-loss record as Lebanon.