Overnight leader Thierry Neuville and title rival Sebastien Ogier retired from the Rally of Turkey after a brutal second leg on Saturday in which Estonian Ott Tanak took over at the top for Toyota. 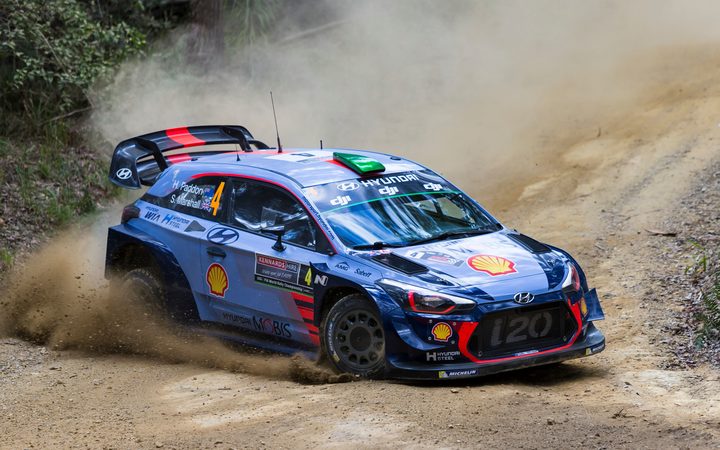 Hayden Paddon in his Hyundai i20. Photo: PHOTOSPORT

Belgian Neuville started the day 0.3 of a second ahead of Ogier but his hopes of winning on Sunday disappeared when his Hyundai suffered irreparable suspension damage on the day's first stage, handing Ogier the lead.

Ogier, the reigning world champion for M-Sport Ford, went off and hit a tree on stage 11 after having dropped to fourth place. The Frenchman had already collected a minute penalty earlier in the day.

Norwegian Andreas Mikkelsen also led for Hyundai before a transmission problem dropped him back down the order to fifth.

Citroen's Irish driver Craig Breen was another in trouble, his car reduced to a burned-out wreck by the side of the road after it caught fire.

Tanak, despite reporting his car to be almost undriveable at one point with a suspected rear damper problem, moved 13.1 seconds clear of Finnish team mate Jari-Matti Latvala ahead of Sunday's final action.

A third successive victory could send the Estonian second overall and above Ogier in the standings although the Frenchman and Neuville can still pick up a handful of points in Sunday's closing Power Stage on the gravel roads around Marmaris.

New Zealander Hayden Paddon was in third place for Hyundai, one minute and 10.5 seconds off the lead.