World number two eventer Tim Price is the best of the New Zealanders at the end of the dressage at the 2018 World Equestrian Games in North Carolina. 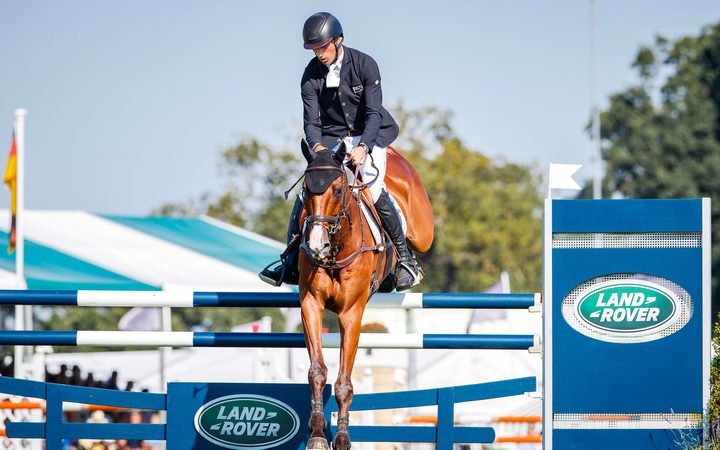 He and Cekatinka scored 27.2 penalty points to sit in ninth equal place with Blyth Tait and Dassett Courage next on 29.7 in 29th.

Julia Krajewski (GER) and Chipmunk FRH lead the 83-strong field on 19.9. But there is still much to play for with Hurricane Florence bearing down on the state and a challenging cross country track to be ridden.

Tim Price may say his "hot little mare" Cekatinka lacked experience at this top level, but she was every bit the picture on her way to a 27.2 penalty point mark. They got a huge cheer from Kiwi supporters and fans both coming in and on completion of their dressage.

He'd had a little pep talk from wife Jonelle before his dressage but couldn't remember exactly what was said. "It was probably truthful but annoying at the same time." He did admit he does take her advice when talking dressage, but their roles were reversed for the cross country.

Price expects the cross country to be very demanding.

"No-one knows what the time will be like. A difficult time heightens difficulty everywhere else," he said. But he quickly backed that up by saying the Kiwis were "pretty gutsy" and could now focus their full attention on the next phase. "There is plenty to do out there. She is a very fast horse (in the cross country) and has a big stride."

He has come to WEG feeling confidence from his Burghley victory but there were many potential places to slip up on the course.

Badminton winner Jonelle Price was "happy enough" with Classic Moet's 30 penalty point dressage effort admitting she wouldn't believe the two could reach such a mark at WEG if asked a couple of years ago. However, since then they have well and truly shown they are super stars. "She is not an out and out obvious dressage horse."

Despite there being a runaway leader in Julia Krajewski, it was still early days and she is looking forward to tomorrow's cross country. "But I am a bit of a princess these days. I wouldn't mind if it buckets down beforehand but I don't want it torrential when I go around." However, Classic Moet has run well before in difficult conditions so is more than capable in all sorts of weather. "That's why she is here."

Dan Jocelyn had a blip in his Games when he forgot a movement towards the end of his test. Despite that, the 48-year-old, who is riding as an individual at WEG, still notched his best-ever 4* score with their 32.8 penalty point effort.

It was Grovine de Reve's first-ever 4* dressage test and Dan was very pleased with the 10-year-old Irish-bred gelding's efforts. "I love the horse," he said. "He has gone from strength to strength. I am thrilled with the way he has performed."

Those sentiments were echoed by co-owner Terry Miller. "We couldn't be more proud," she said. "He had him just right out there."

Chef d'equipe Graeme Thom said it was a great finish to the dressage phase.

Thom said that after much discussion and head scratching by the ground jury the Kiwis were very happy that Hurricane Florence has slowed down enough to allow them to run the cross country track in its entirety.