Naomi Osaka says Serena Williams's row with the umpire during the U.S. Open final had not altered her feelings about winning a Grand Slam, largely because she had no idea how she was supposed to react. 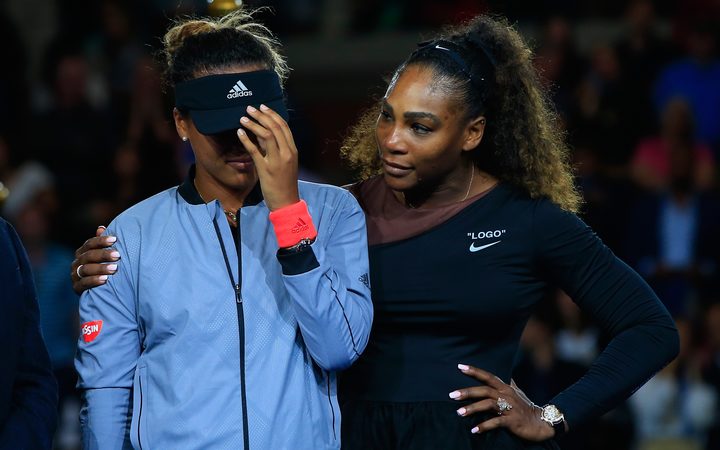 US Open winner Naomi Osaka is comforted by runner up Serena Williams during the trophy presentation Photo: AFP

The Japanese player's breakthrough triumph in New York was overshadowed by an explosive row between her opponent Williams and umpire Carlos Ramos which resulted in the 23-times Grand Slam champion being docked a game and fined $17,000.

The 20-year-old was reduced to tears during the presentation ceremony but on her arrival back in Japan on Thursday, she said she had not been saddened by the incident.

"For me, I don't feel sad because I wouldn't even know what I'm expected to feel," she told a news conference in Yokohama ahead of the Pan Pacific tournament that begins on Monday.

"Because it was my first final and my first Grand Slam victory, overall I felt really happy and I know that I accomplished a lot.

"I don't think I even thought about feeling sad because there's no experience for me to draw on (from) any other Grand Slam final."

One of the most controversial Grand Slam finals of all time divided tennis and triggered a debate about sexism in the sport, fuelled by Williams's assertion that Ramos would not have dealt with a male player in the same way.

Much of the criticism of Williams has centred on how her actions had spoiled a precious moment for Osaka, who was even moved to apologise for beating the home favourite to a New York crowd angrily booing Ramos.

In becoming her country's first ever Grand Slam singles champion, Osaka, the daughter of a Haitian father and Japanese mother, is also helping break new ground in Japan as her biracial identity challenges the country's self-image as a racially homogenous society.

Public attitudes are slowly changing as Japanese society becomes more integrated with the global economy, and the emergence of more ethnically mixed celebrities, especially in sport, is helping.

For her part, Osaka is not thinking too much about how her identity is perceived.

"For me, I'm just me," said Osaka, when asked whether she represented a 'new Japan'

"I know the way that I was brought up, people tell me I act kind of Japanese so I guess there is that.

"But if you were talking about my tennis, I think my tennis is not very Japanese."

Osaka, currently ranked seventh in the world, is aiming to qualify for the WTA Finals in Singapore at the end of the season.

Furthermore, in embracing her new high profile, Osaka wants to serve as a role model for young Japanese children.

"I have definitely been thinking about if little kids were watching and they wanted to play tennis too," she said.

"I've always thought that Kei (Nishikori) is a super good role model on the men's side and I wish that there was one on the women's side.

"So hopefully I can be that role model."